Who Is Pete Davidson? A Look at His Career, Family and Dating History 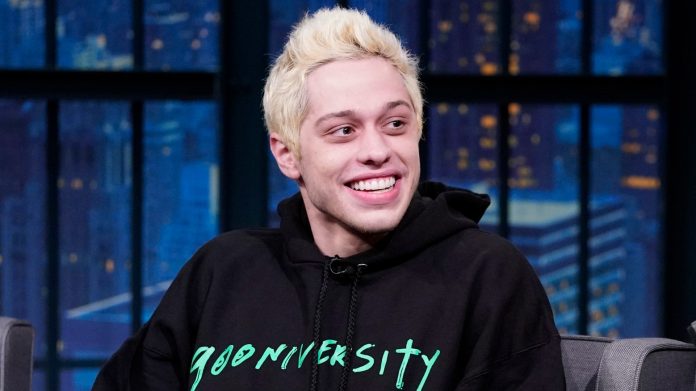 Pete Davidson is a name that’s been in the public domain for a while, but you might not know that much about him. Since he and Kim Kardashian have gone official with their relationship, here’s everything you need to know, from age to career and dating history.

WHO IS PETE DAVIDSON?

Born on 16 November 1993, Pete is 28 years old and is a comedian, writer, producer and actor. Just a few accolades to his name, then.

In 2016, he featured on the Forbes 30 Under 30 list; the same year he filmed his first stand up special Pete Davidson: SMD. Later in 2020 came his second stand up special, Alive from New York on Netflix.

His father Scott Matthew Davidson was a New York City firefighter who died during the 9/11 terrorist attacks in 2001, when Pete was seven. His mother is Amy Davidson (née Waters).

As a teenager, Pete was diagnosed with Crohn’s disease – a type of inflammatory bowel disease – which he requires intravenous treatment for. “I got Crohn’s disease when I was 17 or 18,” he told High Times in 2016. “My stomach would just be in pain all day, and I wouldn’t be able to eat.”

In an conversation for Variety’s Actors on Actors series in 2017, Pete revealed he had been diagnosed with borderline personality disorder. “I got diagnosed with BPD a few years ago, and I was always just so confused all the time, and just thought something was wrong, and didn’t know how to deal with it,” he said at the time.

“Then, when somebody finally tells you, the weight of the world feels lifted off your shoulders. You feel so much better.”

Pete has made no secret of his history with substance abuse, revealing in 2017 that he had been getting help for drug use and was sober after many years. In 2019, he also made it known on SNL that he was going to rehab, saying at the time, “I’m going on a little ‘vacation.’ You know, the kind of vacation where insurance pays for some of it, and they take your phone and shoelaces. And you have roommates but it stills costs like, $100,000.”

WHAT IS PETE DAVIDSON FAMOUS FOR?

Since 2014, Pete has been a cast member on the NBC sketch comedy show Saturday Night Live. He’s also a successful stand-up comedian, appearing on Adam DeVine’s House Party and Jimmy Kimmel Live! as well as going on live tours.

His acting career kicked off in 2013 with a guest star on Brooklyn Nine-Nine, while he co-wrote and starred in the semi-autobiographical comedy-drama film The King of Staten Island in 2020. In 2021, he had a role in blockbuster The Suicide Squad alongside the likes of Margot Robbie.

WHO HAS PETE DAVIDSON DATED BEFORE?

The actor-slash-comedian-slash-producer has a history of dating famous faces. First, it was US actress and stand-up comedian Carly Aquilino back in 2015, before dating writer and actress Cazzie David for two years until 2018.

From May 2018, Pete had a whirlwind romance with Ariana Grande, proposing to the singer one month after they were first linked. The pair later split in October that year.

Next, Pete was linked to actress Kate Beckinsale in January 2019, confirming the relationship with a kiss in March. They split in April.

Following speculation, Pete and Kaia Gerber confirmed their relationship in November 2019 when they were spotted holding hands. The pair dated for a couple of months, before splitting in January 2020. Pete opened up about the breakup the following month in a sit-down interview with Charlamagne Tha God posted on YouTube. “We were dating for a few months,” he explained. “She’s very young, and I’m f***ing going through a lot and it was before I went to rehab.”

Rumours of a relationship between Pete and Bridgerton star Phoebe Dynevor first arose in March 2021. The pair were later spotted kissing at Wimbledon in the summer, before splitting in August.

Most recently, Pete and Kim Kardashian have gone public with their relationship on 19 November, when they were pictured holding hands. The pair worked together when Kim hosted Saturday Night Live in October, before sources said they had been ‘texting all day’ ever since, and even wore matching outfits at his birthday party.

So there you go – a whistle-stop tour of Pete Davidson facts.