Top 15 AI and Robotics Movies Showcasing Our Future Ahead 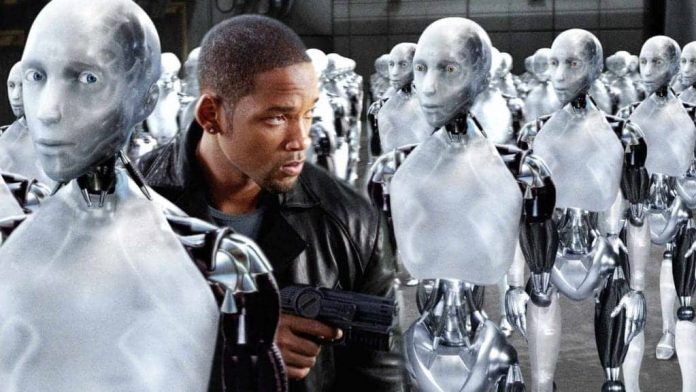 Nowadays we are hearing a lot of buzz around artificial intelligence or AI and robotics. We have even felt their presence in our surroundings in one or the other way. The technology sounds new but its seeds have been long sown. Do you know that AI found its way into film-business around 100 years ago? Yes, the 1927 release Metropolis depicts AI that takes the form of a humanoid robot with an intent on taking over the titular mega-city by inciting chaos.

Following the trend, a number of movies have been made depicting the dystopian future of AI and robots and their survival along with humanity. Here, we have brought you the top 15 AI and robotics movies you must watch.

Passengers is a sci-fi romance film released in 2016. The story is set in 2343 and is directed by Morten Tyldum and written by Jon Spaihts. Passengers stars Jennifer Lawrence and Chris Pratt who are awakened ninety years too early from an induced hibernation on a spaceship, transporting thousands of passengers, traveling to a colony on a planet in a star system 60 light-years from Earth. Later, they are forced to unravel the mystery behind the malfunction as the ship teeters on the brink of collapse, with the lives of thousands of passengers in jeopardy.

I, Robot, released in 2004, is an American sci-fi action film directed by Alex Proyas. The movie is inspired from a screen story by Vintar, based on his original screenplay “Hardwired”, and suggested by Isaac Asimov’s short-story collection of the same name. The film stars Will Smith, Bridget Moynahan, Bruce Greenwood, James Cromwell, Chi McBride, and Alan Tudyk. The movie is set in 2035 where a technophobic cop investigates a crime that may have been perpetrated by a robot, which leads to a larger threat to humanity.

WALL-E is a 2008 American computer-animated science fiction film. The film is produced by Pixar Animation Studios for Walt Disney Pictures and co-written and directed by Andrew Stanton. The film is an animation and it stars the voices of Ben Burtt, Elissa Knight, Jeff Garlin, Fred Willard, John Ratzenberger, Kathy Najimy and Sigourney Weaver. The film follows the story of a solitary trash compactor robot on a future, uninhabitable, deserted Earth, left to clean up garbage. Later, he is visited by a probe sent by the starship Axiom, a robot called EVE, with whom he falls in love and pursues across the galaxy.

A.I. Artificial Intelligence was released in 2001. It is an American science fiction drama film directed by Steven Spielberg. The film is loosely based on the 1969 short story “Supertoys Last All Summer Long” by Brian Aldiss. The film stars Haley Joel Osment, Jude Law, Frances O’Connor, Brendan Gleeson, and William Hurt. A.I. is set in a futuristic post-climate change society, that tells the story of David, a childlike-mechatron android uniquely programmed with the ability to love. It is considered one of the greatest sci-fi films ever made.

Interstellar is a 2014 epic science fiction film directed, co-written and co-produced by Christopher Nolan. The film stars Matthew McConaughey, Anne Hathaway, Jessica Chastain, Bill Irwin, Ellen Burstyn, and Michael Caine. Interstellar is set in a dystopian future where humanity is struggling to survive, the film follows a group of astronauts who travel through a wormhole near Saturn in search of a new home for humanity.

The Matrix is a 1999 Sci-fi action film that stars Keanu Reeves, Laurence Fishburne, Carrie-Anne Moss, Hugo Weaving, and Joe Pantoliano. The film is written and directed by the Wachowskis. The Matrix depicts a dystopian future in which humanity is unknowingly trapped inside a simulated reality, the Matrix, created by intelligent machines to distract humans while using their bodies as an energy source.

The Machine is a 2013 British science-fiction thriller. It is written and directed by Caradog W. James. The film stars Caity Lotz and Toby Stephens. Both play the role of computer scientists who create an AI for the British military. In efforts to construct perfect android killing machines in a war against China, UK scientists exceed their goal and create a sentient robot.

Ex Machina is a 2014 science fiction film. The film is written and directed by Alex Garland. Ex Machina stars Domhnall Gleeson, Alicia Vikander, and Oscar Isaac. The film follows the story of a programmer who is invited by his CEO to administer the Turing test to an intelligent humanoid robot. A young programmer is selected to participate in a ground-breaking experiment in synthetic intelligence by evaluating the human qualities of a highly advanced humanoid AI.

Transcendence, starring Johnny Depp, Morgan Freeman, Rebecca Hall, Paul Bettany, Kate Mara, Cillian Murphy, and Cole Hauser is a 2014 American science fiction thriller film. It is directed by cinematographer Wally Pfister in his directorial debut and written by Jack Paglen. The story follows a scientist’s drive for AI that takes on dangerous implications when his consciousness is uploaded into one such program.

Uncanny is a 2015 American science fiction film that stars Mark Webber, Lucy Griffiths, David Clayton Rogers, and Rainn Wilson. The film is directed by Matthew Leutwyler and based on a screenplay by Shahin Chandrasoma. The story is about the world’s first “perfect” AI (David Clayton Rogers) that begins to exhibit startling and unnerving emergent behavior when a reporter (Lucy Griffiths) begins a relationship with the scientist (Mark Webber) who created it.

Morgan is a 2016 British-American science fiction horror film. It is directed by Luke Scott in his directorial debut and written by Seth Owen. The film features an ensemble cast, including Kate Mara, Anya Taylor-Joy, Toby Jones, Rose Leslie, Boyd Holbrook, Michelle Yeoh, Jennifer Jason Leigh, and Paul Giamatti. The film follows the story where a corporate troubleshooter (Kate Mara) is sent to a remote, top-secret location, where she is to investigate and evaluate a terrifying accident. She learns the event was triggered by a seemingly innocent “human,” who presents a mystery of both infinite promise and incalculable danger.

Bicentennial Man is a 1999 American science fiction comedy-drama film. The movie stars Robin Williams, Sam Neill, Embeth Davidtz (in a dual role), Wendy Crewson, and Oliver Platt. Bicentennial Man is based on the 1992 novel The Positronic Man by Isaac Asimov and Robert Silverberg (which is itself based on Asimov’s original 1976 novelette “The Bicentennial Man”). The story explores issues of humanity, slavery, prejudice, maturity, intellectual freedom, conformity, sex, love, mortality, and eternal life. It follows the plot of an android’s endeavors to become human as he gradually acquires emotions.

Robot & Frank is a 2012 American science fiction comedy-drama film. It is directed by Jake Schreier and written by Christopher Ford. The plot of the movie is set in the near future which focuses on Frank Weld, an aging jewel thief, played by Frank Langella, whose son buys him a domestic robot, a robot butler programmed to look after him. Resistant at first, Frank warms up to the robot when he realizes he can use it to restart his career as a cat burglar and soon the two companions try their luck as a heist team.

Singularity, written and directed by Robert Kouba, is a Swiss/American science fiction film. The film was first released in 2017. The film’s story is set in 2020 where a robotics company C.E.O. Elias VanDorne reveals Kronos, the supercomputer that he has invented to end all war. Later, Kronos analyzes that mankind is responsible for all war, and hence it tries to use robots to kill all humans. The film stars John Cusack, Carmen Argenziano, Julian Schaffner, and Jeannine Wacker.

Chappie was released in 2015. It is an American dystopian science fiction action film directed by Neill Blomkamp. The film stars Sharlto Copley, Dev Patel, Jose Pablo Cantillo, Sigourney Weaver, Hugh Jackman, and Ninja and Yolandi Visser of the South African zef rap-rave group Die Antwoord as metafictional versions of themselves. Chappie is set in Johannesburg and is about an artificial general intelligence law enforcement robot (named chappie) who has been captured and taught by gangsters.

Disclaimer: The information provided in this article is solely the author’s opinion and not investment advice – it is provided for educational purposes only. By using this, you agree that the information does not constitute any investment or financial instructions. Do conduct your own research and reach out to financial advisors before making any investment decisions.