The Top Richest Women In The World 2022 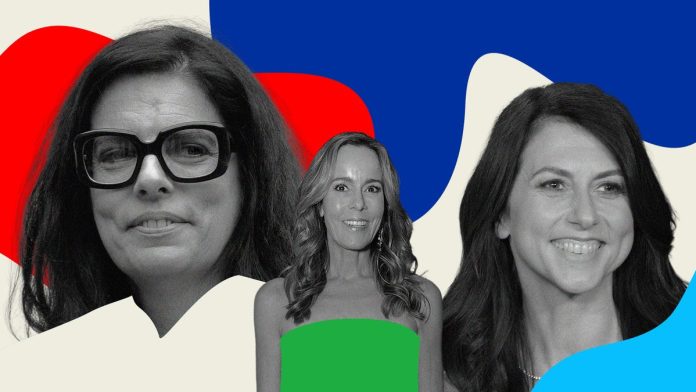 There aren’t many women billionaires, but the 10 richest are worth $401 billion

Among the 2,668 billionaires on this year’s Forbes list, there are few women: just 327, down from 328 last year. In all, these 327 women (including those who share their fortune with their spouse, child or sibling) are worth a collective $1.56 trillion, up from $1.53 trillion last year.

The majority of these ultra-rich women—226— inherited their wealth, including the world’s three richest women: L’Oréal heiress Francoise Bettencourt Meyers, Walmart heiress Alice Walton and Julia Koch, who inherited a stake in Koch Industries when her husband, David Koch, died in 2019. This year’s richest new woman billionaire is also an heir: Czechia’s Renata Kellnerova and her four children inherited an estimated $16.6 billion after her husband, Petr Kellner, died in a helicopter crash in March 2021.

One hundred and one women on this year’s World’s Billionaires list are self-made–meaning they founded or cofounded a company or established their own fortune, as opposed to inheriting it–including roofing supply entrepreneur Diane Hendricks, Gap cofounder Doris Fisher and British online gambling entrepreneur Denise Coates.

Notable newcomers this year include Rihanna, whose beauty empire makes her Barbados’ first billionaire; Melanie Perkins, the 34-year-old cofounder of design startup Canva; and Melinda French Gates, who’s being listed as a billionaire in her own right following her divorce from Bill Gates in mid 2021.

The U.S. has the highest number of female billionaires in the world, with 90, followed by China (63, including 11 from Hong Kong) and Germany (35).

Here are the top 10 richest women in the world:

Bettencourt Meyers is the richest woman on the planet for the second year running. She’s the granddaughter of the founder of beauty giant L’Oréal and first appeared on the World’s Billionaires List in 2018, following the death of her mother, Liliane Bettencourt, then the world’s wealthiest woman.

The daughter of Walmart founder Sam Walton, Alice Walton’s fortune is up by an estimated $3.5 billion over the past year thanks to rising Walmart stock. She was the world’s richest woman in 2020, but lost her spot to Bettencourt Meyers

Julia Koch, the widow of conservative donor and philanthropist David Koch, and her children own a 42% stake in Koch Industries, the second-largest private company in the U.S. David’s older brother, Charles Koch, is chairman and also owns a 42% stake.

Since divorcing Amazon founder Jeff Bezos in 2019, Scott has become one of the most prolific philanthropists in history. She’s donated $12.5 billion to more than 1,250 organizations in less than two years.

Mars inherited an estimated one-third of Mars Incorporated, the candy and pet food conglomerate behind M&M’s and brands like IAMS and Pedigree. The company was founded by her grandfather, Frank C. Mars, in 1911.

SinRinehart chairs Australian mining and agriculture company Hancock Prospecting Group, which was founded by her father Lang Hancock (d. 1992). For years, she has been embroiled in a court battle against her adult children over a family trust, which will continue until at least next year; a judge reportedly delayed their next court date to 2023.

The widow of Republican kingmaker and casino magnate Sheldon Adelson, Miriam now owns her late-husband’s nearly 50% stake in Las Vegas Sands following his death in early 2021. Two months after Adelson died, the company agreed to sell its marquee assets in Las Vegas, including the Venetian Resort and the Sands Expo and Convention Center, for $6.25 billion in an effort to focus on the Asia market.

Susanne Klatten owns about 19% of German automaker BMW, which she inherited from her mother Johanna Quandt and father Herbert Quandt, the industrialist who is credited with rescuing BMW from bankruptcy in 1959. Klatten also owns chemicals company Altana.

Since divorcing Amazon founder Jeff Bezos in 2019, Scott has become one of the most Fontbona is the widow of Chilean magnate Andrónico Luksic, who died of cancer in 2005 after building a fortune in mining and beverages. She and her family own copper mines in Chile through Antofagasta Plc, which trades on the London Stock Exchange. They also own a majority stake in Quiñenco, a publicly-traded Chilean conglomerate that does business in banking, beer and manufacturing.

Abigail Johnson has been CEO of Fidelity Investments since 2014 after taking over for her father Ned Johnson III, who died in March. She owns an estimated 24.5% stake in the firm, which has $4.2 trillion in managed assets and was founded by her grandfather in 1946.

Share
Facebook
Twitter
Pinterest
WhatsApp
Linkedin
Telegram
LINE
Viber
Previous articleWho Is the Richest Person in the World? Top 10 Billionaires and 2022 Net Worth – from Elon Musk to Jeff Bezos
Next articleThe 14 Best Books of the Year so far 2022