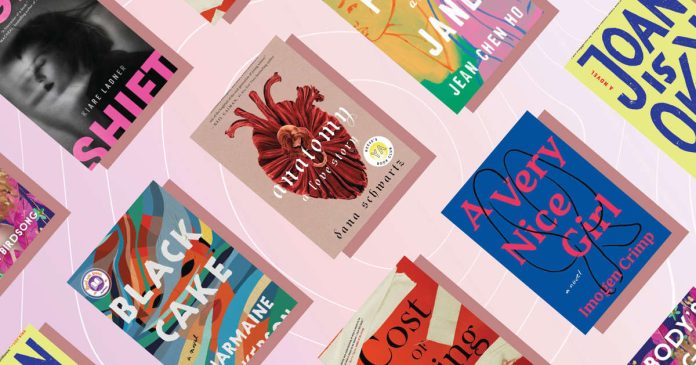 This year is already serving up addictive novels, thrillers, nonfiction books, and audiobooks—there’s something excellent for everyone.

It’s the dead of winter, and you need a great book. You also need a nap and a seaside cottage-vacation, but let’s start easy.

The best new books of 2022 have begun to arrive in the form of dazzling hardcovers and highly listenable audiobooks. These are the books that will have library hold lists blowing up like the wait list for a Birkin bag. These are the first titles of the year to already have book club members saying in increasingly strained voices, “I have to disagree with you on that.” (If you’re in my book club and you’re reading this: I don’t mean us! We have achieved the perfect spirit of respectful debate!) You will see your favorite influencers posing at the side of pools with these books casually slung over a chaise, and you will wonder if they have even read a chapter, and then you will wonder if by wondering you are engaging in casual misogyny. Far, far easier to just read the books yourself.

Follow along for the first really excellent new books of 2022.

Close. Fraught. Female. Friendship. And with that, we’re sold. Fiona and Jane spans decades, the length of a country, and immeasurable emotional distance in the relationship between two Asian American women who meet as teens in L.A. in the ’90s. A review in The Washington Post raved, “Fiona and Jane celebrates a woman’s ability to be late, to show up in their own lives when and where they want to, to change their minds, to be lonely and to be in love, and to be respected regardless.”

There’s a whole lot of Holocaust discourse going on, ranging from misinformation and ignorance to the true evil of Holocaust denial. You can combat this by reading one of the many popular novels about the Holocaust, but these books tend to focus, oddly, on the “uplifting” parts of the Holocaust. But we really learn about the Holocaust when we abandon the idea that much of it was uplifting. A better antidote is to read the words of an actual survivor. Mala Kacenberg was a Jewish teenager from Poland who survived the killing of her family, hid from Nazis in the forest, and then posed as a Christian in Germany until the end of the war. And yes, there is an uplifting detail—she found a stray cat who stayed with her and comforted her in the forest, and whom she referred to as her “angel.”

As if we wouldn’t buy this Y.A. novel just to display the cover in our dark academia-themed bedrooms, Anatomy: A Love Story also comes with Reese Witherspoon’s stamp of approval and status as a number one New York Times best seller. Schwartz—whose work has been seen in Glamour—sets her sexy feminist tale among the graveyards of 1800s Edinburgh. So, naturally, it is a romance.

The scarily impressive Weike Wang got a doctorate in public health and an MFA in creative writing at the same time, something I remember mournfully every time I’m walking through a bookstore and see her name. Also, she’s hilarious—as she demonstrates in Joan Is Okay, which follows a single 30-something Manhattan ICU doctor dodging everyone who thinks she won’t be complete until she is a wife. Celeste Ng, the author of Little Fires Everywhere, recommends this one.

Kendra James went on to be a founding editor at Shondaland, but long before that, she had a more dubious distinction—in 2006 she was the first Black American legacy student at her very white boarding school. Plenty of Black students had attended the school, James explains in this memoir, but alums didn’t tend to send their children to the school—for good reason, she learned. And yet James matriculated and went on to work as an admissions recruiter for schools including her alma mater, specializing in diversity. In Admissions, she deconstructs the chokehold that whiteness and wealth have on private education. You’ll laugh almost as much as you cringe.

Frequent Glamour contributor and woman of good taste Lyz Lenz recommends this book, a chilling crime novel about a murder in an Iowa cornfield. The investigator on the case—a woman who was a friend of the deceased—fears the murder might be linked to industrial farming. Young’s novel will be the first in a series that promises cold cases and cornfields.

7. Worn: A People’s History of Clothing by Sofi Thanhauser (January 25)

How is clothing made? Who makes it? How can we dress ourselves, ethically? Thanhauser, a writing teacher at the prestigious Pratt Institute, takes readers through linen, cotton, silk, synthetics, and wool, teasing out the story of each textile. In readable, highly researched prose, she discusses everything from 170,000-year-old animal skins to the forced labor camps where detained Uyghurs harvest cotton under the watchful eyes of the Chinese government. This is a must-read for anyone who takes fashion seriously.

Another novel that we would buy just for the gorgeous cover, Black Cake is the super-buzzy story of two siblings trying to work out the secrets to their family’s past. Black Cake is already being developed for a Hulu series by Oprah’s production company. And Taylor Jenkins Reid, who wrote best sellers Daisy Jones & The Six and Malibu Rising, has said that she loves this book. Just think! If you read this now, you could be among the first to say, “Well, I actually read the book first, so…” And more to the point—Wilkerson’s book is equal parts moving and thrilling.

“Stop what you’re doing, shut up, and read this book,” popular book TikToker Ayman told her audience of 687,000-plus readers. “This book smacked my ass like a drum.” The Spanish Love Deception was originally self-published, but when the romance novel went viral on TikTok, it was picked up by a major publishing house. The story combines the tropes of enemies-to-lovers, fake relationship, wedding-date drama, and international vacation. Expect the perfect ratio of high levels of plot matched with high levels of smut.

How much does it cost to try to kill yourself? How much does it cost to survive? In sharp, perceptive essays, Emily Maloney considers these questions, ones she had to answer herself at the age of 19, when she attempted suicide and found herself not only alive but also footing a giant hospital bill. “Sitting on a cot in the emergency room, I filled out paperwork certifying myself the responsible party for my own medical care—signed it without looking, anchoring myself to this debt, a stone dropped in the middle of a stream,” she writes. Maloney went on to work as an emergency room tech, the person who helps assign costs to patient stays. Her book examines the broken American health care system in a way that is both personal and universal to anyone who has ever feared a doctor’s bill.

The heroines of Nobody’s Magic are three Black women from three different walks of life. All of them have albinism, and all of them are facing a kind of crisis in their life. Birdsong, a poet, has said she wanted to combat representations of people with albinism as unwanted and eerily supernatural, and to communicate instead that “they’re beautiful, they’re desirable, they’re dynamic.” Already her book is receiving reviews that use the same words to describe her prose and storytelling.

We all know someone who has lived the plot of A Very Nice Girl—or maybe we’ve lived it ourselves. A young woman with lots of potential and no cash starts dating an older, wealthy man, whose apparently beautiful life obscures his more manipulative tendencies. A Very Nice Girl has earned comparisons to Sally Rooney novels and to Raven Leilani’s acclaimed Luster.

“At its peak my obsession with her was like a form of self-harm: a private source of pain and comfort,” the 23-year-old narrator of Nightshift begins. Once again, we have arrived at our favorite topic: fraught female friendship. This time it’s young women working nights at crappy jobs in 90s London. You’ll rip through this, reading through the night, as fixated on the story as Ladner’s characters are fixated on each other.