The 7 Ancient Wonders of The World 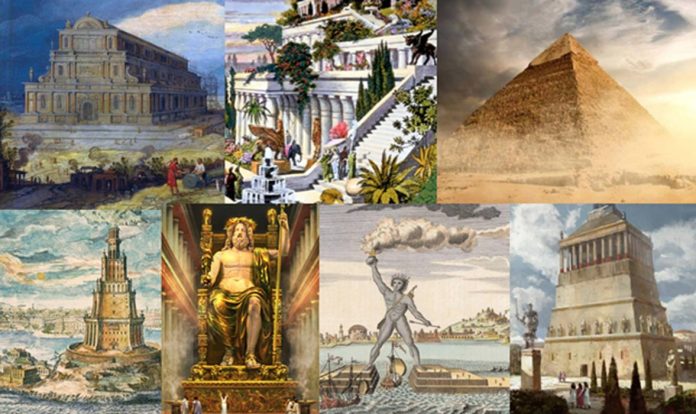 Though most of the original 7 wonders of the ancient world have gone non-existent, they continue to inspire the generations after generations. They have been symbolic of the skills and creativity of our ancestors.

The Great Pyramids at Giza (Egypt)

The Pyramid is believed to be built between 2584 & 2561 BC. Incidentally, it is the only structure among the seven wonders of the ancient world that has continued to exist throughout the centuries.

The structure includes three pyramids known as Khufu (Cheops), Khafra (Chephren), and Menkaura (Mycerimus). Of them, Khufu has been considered to be the tallest man-made structure in the world. The perfect symmetry without the use of modern tools is indeed what deserves a deeper study and analysis.

The pyramids are believed to contain treasures, however, nothing of the sort exists now. It is estimated that the treasure was looted within the first 200 years of the construction. Worthy of being in the 7 wonders of the ancient world.

The Hanging Gardens of Babylon are believed to be built around 600 BC. The worthy addition to the seven wonders of the ancient world, the gardens are attributed to Babylonian king Nebuchadrezzar II.

The ancient records indicate the presence of the gardens near the Euphrates river. The gardens are said to be 75 feet above the ground level and consisted of self-watering plants. The emperor built this garden to please his wife who had homesickness about her home. However, scientists believe it to be a fictional tale.

There is no mention in the Babylonian cuneiform scripts. The concept of self-watering plants is again something one may not be able to believe.

After being at Olympia for over 8 centuries, the statue was shifted to Constantinople and was destroyed in a fire ( some believe it was an earthquake) in around 462 BC. It is indeed a sad loss to the world to be missing this excellent piece of art among the 7 ancient wonders of the world.

Temple of Artemis at Ephesus

The temple of Artemis is believed to be destroyed and rebuilt several times. And yes, the site remained the same over the years.

The initial temple was stated to be built around 550 to 350 BC. Designed by architect Chersiphron, the temple was worked on by the world’s renowned artists. The temple is believed to burnt by fire in 356 BC, on the same day Alexander the Great was born according to legends. The temple was rebuilt six years later. It was again destroyed in 262 AD by Ostrogoths.

The temple was believed to be built again and finally destroyed in 401 AD. Another sad loss to the world as they stood to lose a great structure that truly deserves to be in the list of 7 ancient wonders of the world.

The Mausoleum was built by Artemisia for her husband, Mausolus who was the king of Carnia. The structure was built in 353 BC.

The mausoleum was built with white marbles in its entirety. It has been recorded that the structure was around 135 feet high. From the architectural point of view, the structure is a combination of Lycian, Greek, and Egyptian styles of construction.

A massive earthquake destroyed the Mausoleum in the 13th century. Its remnants were later used for the fortification of a castle. Some relics were dug out in 1846 by archeological teams. The relics now are at display at the British Museum in London as the only indications of this awesome structure from among the 7 Ancient Wonders of the world.

The Colossus is the huge structure built for the Sun God, Helios. The statue is built in the third century.

The design of the Colossus is attributed to the sculptor Chares. The statue stand at a height of 100 feet. In fact, it was considered to be the tallest statue in the ancient world. The Colossus is said to be completed in 280 BC and stood the test of time for over 60 years.

The statue was destroyed by an earthquake at around 220 BC. Sadly enough, there were no attempts made to rebuild this great piece, one of the huge among the 7 wonders of the ancient world. It is believed that Arabs who invaded Rhodes and sold the remnants of the great structure as scrap metal. Incidentally, the statue of Helios was made of bronze and depicted the Sun God standing naked with a torch in one hand and a spear in the other.

The lighthouse was meant as a guide for the ships in the Nile river. Though no remnants exist as of now, there are pieces of evidence as to the icons on ancient coins. The structure is believed to have three layers. It could be a square level at the bottom, a hexagonal middle layer, and a cylindrical top. On that was a 16-foot statue. The total length of the structure is believed to be around 200 to 600 feet.

However, a series of earthquakes destroyed this great piece of art that was rightly included among the seven wonders of the ancient world. A few remnants have been discovered from the Nile river. Incidentally, the structure has inspired the modern-day Statue of Liberty in New York.

The list of the 7 Ancient wonders of the world indeed makes great reading. In fact, these constitute the original 7 wonders of the world. Sadly enough, we would not be able to visit any of those wonderful creations. However, these give us a clear idea that the human psyche had a such a great mind back then. The level of art and creativity at that time back in history should indeed be a great lesson for the technocrats of today’s modern world.