The 11 Most Incredible Places to Visit in Switzerland 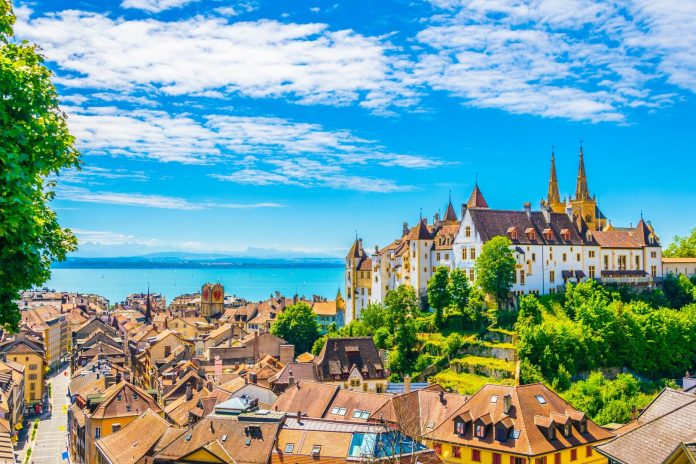 No country is perfect, but, let’s face it, Switzerland gets pretty darned close.

The Alps ripple across 60% of the country and the landscapes and towns look like they have been dreamed up by a particularly imaginative child. We’re talking glacier-capped peaks, crash-bang waterfalls and lakes the most surreal shade of turquoise blue; red trains curling up to improbable heights, meadows clanging with cowbells that you can skip down with Heidi-like glee and turreted castles of the fairytale kind.

Even the culture-filled cities have magnificent vineyard, lake or river backdrops, and the mountains are never more than a whisper away. As natural beauty goes, Switzerland is off the charts.

The real wonder of Switzerland, however, is just how brilliantly accessible all this is – by train, bicycle, boat, car or on foot. This bijou Alpine nation bundles a world of experiences into one efficiently organized trip. You can spend the morning wafting around cutting-edge art galleries and the afternoon pounding the slopes. Hike alongside a glacier in Valais or lounge on a palm-rimmed piazza in Italian-flavoured Ticino.

Here’s our insider guide to the places that will make your trip to Switzerland one to remember.

The idyllic Jungfrau Region is the icing on the Alpine cake of Switzerland’s Bernese Oberland. Here sky-high peaks, glaciers and thundering falls elicit gasps of wonder wherever you go. And grazing the 4000m mark are Switzerland’s ‘big three’ – Eiger (Ogre), Mönch (Monk) and Jungfrau (Virgin), enshrined in mountaineering legend.

Rush this region and you’ll regret it. Allow a week or more to dive in deep: with a once-in-a-lifetime ride up to the everlasting snow at Europe’s highest train station, 3454m Jungfraujoch, with hiking, skiing, sledding and zip-lining among mountains of myth in Grindelwald, with waterfalls galore in Lauterbrunnen and with every kind of extreme sport imaginable in Interlaken (skydiving, ice climbing, glacial bungee jumping – you name it). This is the great outdoors on a blockbuster scale.

Bern often pops up in those I-can’t-believe-it’s-the-capital trivia questions, but frankly, Switzerland’s first city deserves to get more love. The cobbled, flag-bedecked medieval Old Town is a Unesco World Heritage treat, with 6km of covered arcades, cellar shops and bars, fantastical folk figures topping 16th-century fountains and the eye-grabbing Zytglogge. Framed by wooded hills and split in two by the turquoise Aare River, this red-roofed city looks good from pretty much every angle. And it’s pure storybook stuff for kids, too, with its giant who snacks on children (the Kindlifresserbrunnen) and resident bears.

Sight-wise, you’ll be drawn to big-hitters like the Einstein-Haus, where the genius developed his Theory of Relativity, the Kunsthaus, with its outstanding fine arts collection and Renzo Piano’s wavy Zentrum Paul Klee (Bern’s answer to the Guggenheim). But in summer, the action’s on the river, with swimming, tubing, rafting and paddle boarding along the Aare River.

Best for romance, vines and castles

Léman to francophones) is a joy to behold, with its mountain backdrop, spirit-lifting views, vineyards and shoreline necklaced with handsome cities and castle-crowned towns.

Marked by its rainbow-kissed Jet d’Eau fountain and with Mont Blanc peeping up on the horizon, Geneva wraps around the lake’s southern shore. The worldly city makes a brilliant launchpad for exploring, with big-hitting museums and galleries to absorb, botanical gardens to stroll, lidos to swim at, Old Town cafes to hang out in and bright-yellow mouettes ferrying locals across the water – surely one of the world’s most scenic commutes.

But don’t stop there. It’s but a quick boat or train hop to Lausanne, which can culturally give Geneva a run for its money, especially with its new Plateforme 10 arts district, the lovely terraced vineyards of Lavaux (a Unesco World Heritage site) and flower-draped Montreux, host to one of the world’s most famous jazz festivals, with the picture-perfect Château de Chillon right on its doorstep.

No peak has more pulling power than the 4478m Matterhorn, a terrific gnarled fang of rock that flings up above the seductive, timber chalet-filled Alpine resort of Zermatt in Valais, nudging the border to Italy. This is Switzerland’s mountain icon, so beloved by the nation that it inspired the pyramid shape of Toblerone chocolate. This is a mountain that will have you obsessed and lunging for your camera – at sunset, sunrise, on walking trails and cable cars, in sun, snow and from every last infuriating angle.

But Zermatt is more than a one mountain wonder. Climbers have been rocking up here since the mid-19th-century and it’s still a magnet for challenging summit ascents today (find yourself a guide at Zermatters). Otherwise, come to hike, ski and gaze over a sea of glaciers and 4000m peaks at Matterhorn Glacier Paradise.

Switzerland has just one national park? Yep, we know it’s a shocker, but trust us, it’s a good one. Snuggled away in a remote corner of the country’s southeast on the border to Italy, the 172 sq km Swiss National Park is the Alps in overdrive: a nature-gone-wild spectacle of high moors, forests, wildflower-freckled pastures, waterfalls, jewel-colored lakes and mountains as high as the sky, where ibex, chamois, marmots, deer and golden eagles roam and fly free. Here wildlife rules and human intervention is kept to a conservation-driven minimum. Some call it Canada in miniature – we can see their point, but frankly why would you want to imagine yourself anywhere else?

Start off on the right foot with the inside scoop on walking trails and ranger-led guided hikes at the visitor center in Zernez.

With medieval castles rising high and the Alps rearing beyond, good-looking Bellinzona, capital of Ticino, is a taste of the best of Italy’s best food and culture in Switzerland. You’ll find a generous splash of Italian flair in its historic center, woven with flower-draped alleys, Renaissance churches and cafe-rimmed piazzas that brim with life, laughter, clinking glasses and the out-of-tune toll of countless campaniles.

Top of any wish list is seeing the castles, among them hilltop Castelgrande, which can be drawn out into a full day’s activity (bring water and comfortable shoes). Plan to spend some time simply soaking up Bellinzona’s spirit and enjoying the excellent restaurants, such as season-driven, Michelin-starred Locanda Orico, lodged in a converted palazzo.

Best for a remote road trip

If you’ve never considered the country’s off-the-radar northwest, perhaps it’s time you did. In the dark forested hills along the French-Swiss border, the Jura Mountains are a natural wonder. This ever-so-peaceful region has its own beauty: meadows of green, ancient forests, rocky outcrops overlooking a trio of lakes against an Alpine backdrop and slow-the-pace villages and valleys little changed in centuries.

Where to begin? With a road trip. Kick off at the Jura Vaudois Nature Park for hikes with dress-circle views of Lake Geneva and Gruyère cheese tastings at rustic Alpine huts. From here, swing north to Lac de Joux, the watchmaking village of Le Sentier, and Vallorbe, honeycombed with Switzerland’s biggest (and most impressive) limestone caves. Tag on a trip to Lac de Neuchâtel and you can bathe in the thermal waters of Yverdon-les-Bains, tiptoe off the map in the lushly rolling Val-de-Travers (birthplace of absinthe) and the great crescent-moon canyon of Creux du Van. Cultured Neuchâtel is a fitting climax, with its fantasy of a lavishly turreted château.

Northeastern Switzerland might not have the in-your-face drama of higher realms of the Alps, but it nevertheless delights in its own serene, deeply rural way, with dairy country unravelling to meet the mountains and half-timbered, gaily muralled towns all fit for a postcard.

Tucked away in the country’s little-explored northeast, this pocket-sized region is perfect for a family holiday with a hit of culture and gentle adventure. You could begin, say, in St Gallen, with a spin of its World Heritage Stiftsbibliothek (Abbey Library), a literary marvel and a feast of roccoco art and architecture. From there, move on to folksy, ridiculously pretty Appenzell, popping into the Schaukäserei to sample regional cheeses.

Muscling further south into the Alps, rise to 2501m Säntis for views embracing six countries, then head to Werdenberg, a tiny speck of a medieval hamlet home to Switzerland’s oldest timber chalets. Close by is Vaduz, Liechtenstein’s princely, castle-topped capital on the banks of the Rhine.

Popularity wise, poor old Basel barely gets a look-in. But that’s a mistake. Straddling the Rhine, this city has got everything going for it: world-class art in some of the country’s best galleries, a hot food scene, avant-garde buildings bearing the hallmark of Pritzker Prize-winning architects, and an upbeat cafe culture. There’s a real energy to this forward-thinking city on the tri-country border, which has risen high off the back of the biotech and pharmaceutical industries.

Allow several days for a satisfying romp of the centre, where must-sees include the Kunstmuseum and its fine arts collection, the Renzo Piano–designed Fondation Beyeler and the Frank Gehry-designed Vitra Design Museum.

But Basel endears itself most to those who look beyond the trophy sights, with sundown drinks by the river, say, or a wild swim in the Rhine. Hire a Wickelfisch, (a fish-shaped waterproof bag) at the tourist office, strip off and go with the flow, floating downstream past the city’s landmarks.

Oh, Lucerne! Reclining on the shores of its glittering namesake lake, this walkable, medieval dream of a city has a magic you can’t quite put your finger on. It will grab you, perhaps, when you are strolling along the promenade as the sun sets in a blaze of gold and pinks. Or as you cruise across its waters to mountains of myth: 2132m Mt Pilatus, where Wagner raved about the Alpine panorama and Queen Victoria trotted on horseback, and 1797m Rigi, with a light so sublime Turner painted it in three different moods.

The little city punches far above its weight culturally, with its iconic medieval bridge, Kapellbrücke, leaping across the Reuss River, Jean Nouvel-designed KKL arts centre and Sammlung Rosengart, harboring a prized private collection of Picassos. Ambling past the belle époque hotels lining its shores, the same views that captivated Goethe, Queen Victoria and Wagner in the 19th century will hold you in their thrall.

With more time on your hands, you can really get out on the lake. Cruise across fjord-like, mountain-rimmed Lake Uri for a taste of Switzerland’s geographical and spiritual heartland. Boats ply the glassy turquoise waters to Rütli, birthplace of the Swiss nation, where the Oath of Eternal Allegiance was signed in 1291, and on to the Tellskapelle, a tiny speck of a chapel embedded in woods. Lore has it that apple-shooting, rebel-yelling folk hero William Tell leapt from the boat of his Habsburg captors to safety here more than 700 years ago.

Regularly landing at the top in quality of living surveys, urban dynamo Zürich never seems to miss a beat: from cool waterside bars on the banks of the River Limmat to its alley-woven Old Town, where the twin-spired Romanesque Grossmünster shines with Augusto Giacometti’s rainbow of stained glass. Le Corbusier’s boldly colored architectural creations and the edgily post-industrial Züri-West neighborhood notch things up a gear further still culturally.

Zürich has a pinch of everything that makes Switzerland special: a dramatic lake backdrop and the Alps etched on the horizon, an avalanche of superb restaurants, bars and cafes, concert halls and galleries (not least the Kunsthaus) with serious cachet, and a leafy lakefront providing a calm contrast to the buzz of the center.

In mid-August, Zürich throws one of Switzerland’s wildest parties: the techno-pumping Street Parade.