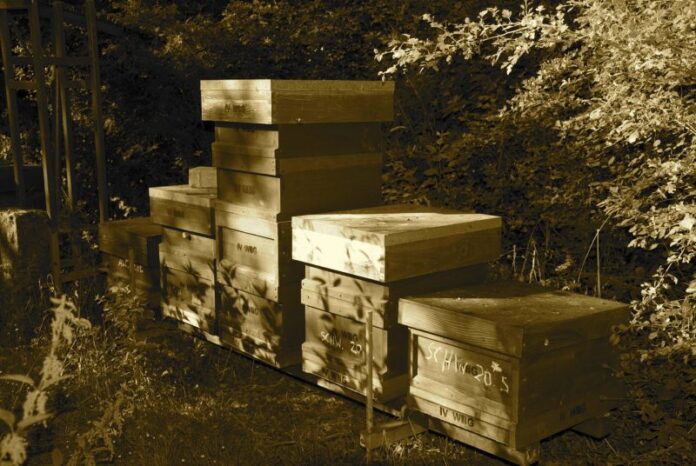 Just before my mother was officially diagnosed with Alzheimer’s disease, a black bear knocked over three of her seven beehives, taking most of the honey and damaging the supers and the frames beyond repair. At that same time in Wuerzburg, Germany, I had been working on a poem that compared beehives to phone booths. It imagined a line of communication between my mother’s hives in America and the hives I had begun learning to open in the beekeeping club in Wuerzburg. Every time I opened the hive it seemed like I was opening a channel to my mother. I used phrases like “flying voices” to describe the feeling of investigating the bees after winter, remembering my young mother, taking stock of what had survived.

She told me about the bear’s destruction and about the Alzheimer’s diagnosis in the same conversation, which connected them for me in a way that seemed too obvious, almost kitschy. I couldn’t put the bears into the poem, I thought. It wouldn’t seem believable: Honeycomb a symbol for mother’s mind; honeycomb destroyed by bear; mother loses memory; line dead. It would make the connection between my mother’s inner world and the beehives seem easy. So, I don’t mention the bear in the poem. I pretend my mother is still at the edge of the field where I grew up, standing in her blue jacket by the light blue boxes. She is lifting one hive open. She doesn’t use the smoker anymore, filled with smoldering burlap and old egg cartons. The bees remember her scent. They sting her only enough that she will never get arthritis and she will never forget that feeling—the pain that is clear and turns to an itch and then heals. When the hive is opened and the bees come to the top, my mother begins whispering words to them, all the words the doctor wrote in his report, all the words she could not repeat, all the words the doctor said she had forgotten. Clock. House. Apple. The bees seem to collect her words on their furry back legs, like pollen. For every word, there is a bee.

Sepia ink, the ink Leonardo da Vinci used for many of his sketches, originally comes from cephalopods; it is a pigment released into water as an escape mechanism.

I have been outside of my country for the last fifteen years. When I left for Germany the first time, my mother was still young and healthy, standing at the edge of the property, waving. She had a curvy body and a hearty laugh, was active in her beekeeping club and often photographed the club’s meetings and activities.

I have joined a beekeeping club in Germany as a way of communicating from afar with my mother, who now does not remember my zip code, who does not remember where she parked her car or why she got up to go into the other room.

Working with the bees, I am not just looking at the same insects my mother once looked at, I am also becoming her. I am lying down in her body and standing up. I am embodying her. I am inheriting her. When my hand enters the hive, it becomes her hand. When I hold up the frames to the light, the bees are listening not only to me, but also to her. When I take a photo of a bee, I am focusing with her eyes on the small pair of wings.

The hive is like a phone booth. That is the gloss that serves the poem I am trying to write. My mother is standing at her open hive; I am standing at the hive in Germany with my smoker and veil. We are talking. I have decided not to write about the bears, though I have dreamt of them knocking down abandoned phone booths on corners, of phone booths full of honey, and bears tearing at my mother’s brain, which is not made of brain but of honeycomb. I’m not going to include these bears, although they are real. I don’t want to admit my mother’s hives are now destroyed, the way most phone booths are, and the way her mind is becoming. And similarly, I don’t want to admit that the phone booth on the corner of the Funkenburgstrasse I used to stand inside when it was raining, sometimes without even calling anyone, is probably gone. I used to stand in the lit glass case as though it were a country of its own, not Germany, not America, its map the size of the bees clustered on the wooden frames. I held my mother’s voice between my hands in that glass case. When I shoved coins or a phone card into a dark slot, almost the size of the little doorway the bees go into and out of, I got my mother’s voice.

My mother is swimming with me in the river, both of us naked, the river holding our bodies completely and at the same time. We swim in circles in the eddy and the stream. My mother’s toes are sticking out and she is laughing and diving under. She is closing her eyes coming up towards the sun. She never wants to get out of this water. There are no pictures of her like this. No pictures of this day, 25 years ago, underwater, above water, underwater. No pictures of this happiness in her.

The pictures I do have of my mother are mostly from the time before I was born. In one, she is riding her horse, Herkimer. She is wearing her cat-eye glasses and a red blouse and matching bandana. She has a firm grip on the reins. It looks as though the horse wants to run, and as though she wants to let her run, but my grandfather has probably asked her to pose for the picture on her horse, and so she is holding Herkimer back, pulling tightly on the reins, squinting. She is eighteen. In another photo she is just a child, seven at the most, standing with her mother in a bathing suit. She still has dimples. You can see in the picture that she is enjoying the water in an innocent, childlike way. No one has hurt her yet.

n the real phone my mother tells me some people live up to six years with Alzheimer’s; some can postpone it even longer. She is very matter of fact, but I am already thinking of her life as something countable. Six years! Six visits home. Six sets of photos. I keep hoping she does not really have Alzheimer’s, but that she is forgetting because she does not want to remember—that some part of her has been holding on to images she can no longer carry.

Maybe every image has a certain weight. Maybe some become lighter because that weight is dispersed among all the people who see the image. And the images that are most personal and can least be photographed—and thus shared—are the heaviest. She is erasing these images—what are they?—finally from her mind. With the loss of this weight, she has also lost physical weight. Her “skinny-jeans” are baggy on her. She hangs a set of them on the clothesline, holding onto the line while she works, as though she might otherwise drift away. When I hug her I can feel the ribs along her back. I can feel each vertebra.

The fact that we mostly work completely covered in the beekeeper’s attire adds anonymity to working with the bees. We don’t have faces; at least our eyes are hidden. The bees become much more important. My mother does not use a veil, but the bees already know everything about her. She has nothing to hide from them. We beginners still imagine it is possible to hide our fears from the bees, our lack of knowledge. We don’t yet know they can take a measurement of our scent, which is more accurate than anything we are capable of recording.

In every young beekeeper I see my mother in the days when she was beginning, ordering the hives in the mail and tapping them together herself. Ordering the bees in the mail. How the family ignored her excitement, walking around her project as though she were a cutout in the rooms of our house, laughing at her when she came running in, saying, “I found a new queen!”

The fact that I live on a different continent than my mother is not the only reason I decided not to take more classic portraits of her. What could I photograph of her now? The way her soul seems to sink further and further behind the surface of her face, as that of a drowning face, looking up through the surface of water at one who might quickly inherit the eyes? Or her body, thin as a scarecrow’s, holding onto the clothesline draped with skinny jeans?

My mother grew up in a family of male photographers, her father and brothers, who joined camera clubs and won prizes for their close-ups of owls, frozen on a branch, red-winged blackbirds, staring straight into the lens. And though they also took posed pictures of my mother—on her horse, or holding a tethered falcon on her wrist—they did not see beyond such images into her world.

All of these photographs are of my mother, who once showed me how to draw peonies using chalks—by drawing their outline, everything but them. She is slowly entering the picture by slowly erasing herself from the picture. I am opening up the hives, looking for the queen—slightly larger than the drones—looking for the brood and for the honey. I am calling my poem Telephone Booth. I am calling my mother.