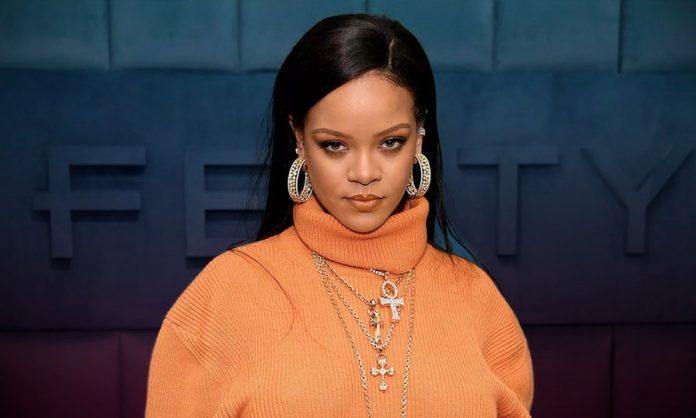 Robyn Rihanna Fenty popularly known as Rihanna is a Barbadian singer-songwriter who gave us hits like ‘Pon de Replay’, ‘SOS’, ‘Umbrella’, and ‘Take a Bow’. A very successful artist still in the prime of her youth, she has already sold over 41 million albums and 150 million songs worldwide, becoming one of the best-selling artists of all time. Born in Barbados, she grew up listening to reggae music and began singing when she was quite young. Disturbed by her chaotic family life and the constant arguments between her parents, she immersed herself in music and before long realized that she wanted to be a professional singer. She formed a musical group while still in high school and got an opportunity to an audition with music producer Evan Rodgers who was highly impressed by the teenager’s talents. He asked the girl to move to New York in order to pursue a full-time career as a singer which she gladly did. Her debut album was soon released and Rihanna became a musical sensation before long. Her peppy, foot-tapping songs became the hot favorites of the youngsters motivating her to venture into films as well. Pretty, young and highly talented, she is today regarded as a teen idol and a fashion icon. Rihanna also puts her fame to good use and is actively involved with several charitable causes

Robyn Rihanna Fenty was born on February 20, 1988, in Saint Michael, Barbados, to Monica Braithwaite, an accountant, and Ronald Fenty, a warehouse supervisor. She is of mixed ancestry which explains her exotic looks. She has two siblings and three half-siblings.

Her childhood was a difficult one, marred by constant arguments between her parents and their eventual divorce. Her father was an alcoholic addicted to cocaine who has since then overcome his addictions.

She received her education from Broome Memorial Primary School and Combermere High School. She loved music from a young age and began singing when she was seven, and went on to form a musical trio with her classmates as a high school student.

She had a chance meeting with American record producer Evan Rogers in 2003 and performed some songs in his presence. The record producer was impressed by the teenager’s talents and invited her to New York to record some demo tapes which could be sent to record labels.

Before long Rihanna had signed a contract with DefJam Recordings and brought out her debut album, ‘Music of the Sun’ in 2005. It debuted at No. 10 on the Billboard 200 and sold over two million copies worldwide despite receiving only mixed reviews from critics.

Her second album ‘A Girl Like Me’ was released the next year. The album not only became a huge commercial success charting in the top ten in 13 countries, but also established the young singer as a teenager sensation. It featured the hit single ‘SOS’ which peaked at No. 1 on the US Billboard Hot 100.

After enjoying more success in the ensuing months, she embarked on the Glow in the Dark Tour with Kanye West, Lupe, N.E.R.D, and others in 2008. The concert tour travelled to Latin America, Asia, Europe, New Zealand and Australia, and received much critical acclaim.

In 2009, her much awaited album ‘Rated R’ was out. She adopted a new musical style in this album which was well-received by her fans. The album reached No. 4 on the US Billboard 200 chart and featured the single ‘Rude Boy’ which topped the US Billboard Hot 100 for six weeks.

The year 2010 was a very eventful year for her. Her album ‘Loud’ went on to become a super-hit prompting the artist to embark on the Loud Tour to promote it further. ‘Loud’ spawned numerous hits including ‘What’s My Name’, ‘Only Girl (In the World)’ and ‘S&M’. She also featured on many hits by other artists, including Jay-Z’s ‘Run this Town’, Eminem’s ‘Love the Way You Lie’ and Kanye West’s ‘All of the Lights’.

Her next album ‘Talk That Talk’, released in 2011 was a dance-oriented pop/R&B crossover album with elements of hip hop, dubstep, electronic and house music. The album’s themes revolved around a nihilist romantic and lascivious lover. The album debuted at No. 3 on the US Billboard 200, and featured the singles ‘Talk That Talk’, ‘We Found Love’, and ‘You da One’.

In 2012, she brought out the album ‘Unapologetic’, mainly a pop and R&B album that incorporated elements of dubstep, hip hop, EDM and reggae. It featured seven singles including the international hits ‘Diamonds’ and ‘Stay’. Her most recent album is ‘Home’, released in 2015.

In addition to her musical career, she has also appeared in small roles in movies such as ‘This Is the End’ (2013), ‘Annie’ (2014), and ‘Home’ (2015). She is a businesswoman too, and is a co-owner, with various other music artists, in the music streaming service Tidal.

Her album, ‘A Girl Like Me’ peaked at No. 5 on the U.S. Billboard 200 album chart and on the UK Albums Chart, and was also very successful in several other countries. It was accredited multi-platinum in Canada, Denmark, Ireland, and U.K., and platinum in U.S., Russia and Australia.

She achieved unprecedented success with the album ‘Good Girl Gone Bad’ which featured the international super-hits ‘Umbrella’ and ‘Don’t Stop the Music’. The album debuted at No.1 on the UK Albums Chart and went multi-platinum in Australia, Canada, Germany, Brazil, Ireland, and Russia.Recommended Lists:

Rihanna formed the Believe Foundation to help terminally ill children in 2006. She frequently performs in charity concerts to create awareness about social issues and to raise money to help the underprivileged. So far she has helped to raise money for children in need, cancer research, and Haiti earthquake victims.

She is the recipient of eight Grammy Awards from 24 nominations. The single ‘Umbrella’ earned Rihanna her first Grammy Award in 2008 and she went on earn several more including those for ‘Run This Town’ (with Jay-Z & Kanye West) in 2010 and ‘Only Girl (In the World)’ in 2011.

Rihanna has dated many men including singer Chris Brown, baseball star Matt Kemp, and Canadian rapper Drake. Her relationship with Chris Brown garnered a lot of media attention due to allegations that Brown used to hit her physically.