Putin: Those That ‘Destroyed’ Afghan Economy Should Provide Aid 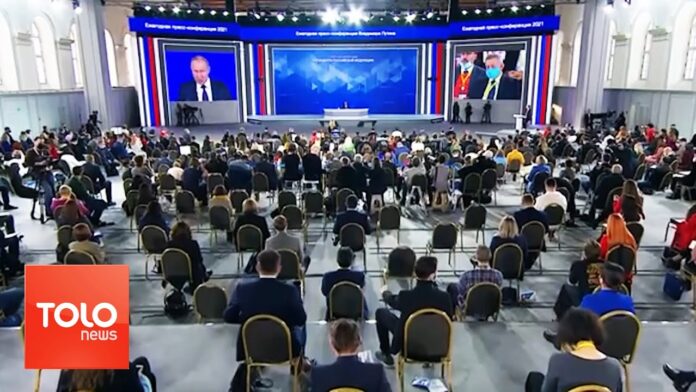 Russian President Vladimir Putin linked the recognition of the current Afghan government with ground realities, saying that “forces that are now at the helm in Afghanistan should be prepared for all ethnic groups to be represented in the country’s leadership.”

Putin made the remarks in response to a question asked by Sputnik News Agency at his annual press conference.

“As for the recognition, we are working in a consolidated way with all the participants of international interaction. We have our position–we will strive for this decision to be a consolidated one,” he said.

However, he said he hoped that relations between Kabul and Moscow would develop in the “best possible way.”

“This is not an idle issue for us because we have open borders with Central Asian republics, the former republics of the Soviet Union, and, of course, the potential incursion of some extremist elements there cannot but cause us certain alarm and concerns,” Putin added.

He stressed that aid to the Afghans should be provided by the US and allies that fought for the past 20 years in Afghanistan.

“For our part, we will do everything that depends on us,” Putin went on to say. “First of all, Afghanistan’s funds need to be unfrozen by foreign banks, primarily US ones, in order to provide humanitarian aid to the Afghan people to the full extent, otherwise [the country] is likely to face famine and other severe consequences which will affect the neighboring states,” he said.

This comes as former Afghan president Hamid Karzai in an interview with CNN called on the international community to put aside their mistrust on the “Taliban” and prioritize helping the people of Afghanistan.

“The reality on the ground is that the Taliban are now the de facto authorities in the country,” he said.

Political analysts believe that the international community should not put more pressure on the people of Afghanistan.

“What Putin said is legitimate because many Afghans want the international community and the US to not make the situation more difficult for them,” said Shirbaz Kaminzada, head of the chamber of industry and mines.