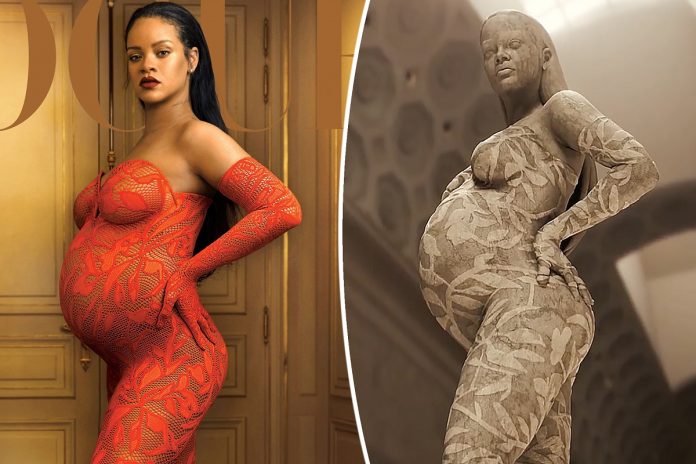 Rihanna is a stone cold superstar.

While the heavily pregnant Bad Gal may have skipped the Met Gala 2022 red carpet, she made an even longer-lasting impression at the museum … as a statue.

On Tuesday morning, Vogue shared an Instagram video showing the “Diamonds” singer immortalized in marble at the Metropolitan Museum of Art, with the help of some clever visual effects.

“The statue of ‘Eirene (The Personification of Peace)’ is usually the highest-profile marble goddess @themetmuseum Greco-Roman galleries,” the magazine captioned the clip.

“But now we’ve got @badgalriri, straight off this month’s Vogue cover.”

In the video, a digital version of a Rihanna statue stands proudly in the museum’s gallery, rocking the same pose she did on the magazine’s May 2022 cover.

“Shut down the met in marble! what’s more gilded than that? Lol!” Rihanna wrote in response, sharing the epic video. “Thank you @metmuseum and @voguemagazine for this historic tribute! y’all bad for this one!”

As the singer’s Savage X Fenty lingerie brand commented on the post, the moment was certainly “LegendaRIH.”

While the real-life Rihanna wore a red lace Alaïa catsuit for her Vogue cover, the statue of the singer was cleverly detailed with the same floral lace pattern.

Fashion fans were disappointed when the “Umbrella” singer was absent from Monday night’s ball, as she’s famous for her standout style moments at the event.

This year’s theme was “In America: An Anthology of Fashion,” and Rihanna was a hotly anticipated guest thanks to her recent bold maternity looks.

Understandably, the Fenty Beauty mogul — who is expecting her first child with A$AP Rocky — likely didn’t travel to New York due to being in her third trimester of pregnancy; flying isn’t recommended for pregnant women after 36 weeks.

Last year, Rihanna and A$AP Rocky made their red carpet debut as a couple at the Met, with the “Stay” singer wearing a voluminous black Balenciaga ensemble featuring a ruffled black coat and plenty of diamonds.

Of course, Rihanna is no stranger to the glitzy gala; who can forget the yellow Guo Pei gown she wore to the event in 2015, or the Pope-inspired getup she chose for the “Heavenly Bodies: Fashion and the Catholic Imagination”-themed 2018 gala?

Despite all of those memorable outfits, we think this marble creation might just have topped them all.