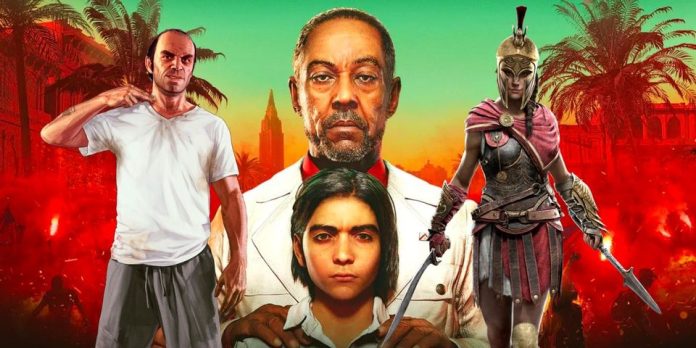 Far Cry 6 has one of the biggest open worlds of this year, and there are many other games to go to for additional open-world action.

This year has had a solid lineup of new video game releases, ranging from surprise hits like It Takes Two, and highly anticipated titles such as Pokemon Brilliant Diamond and Shining Pearl. There’s truly been a little bit of everything, and one of the biggest new releases for open-world fans has been Ubisoft’s Far Cry 6. The newest installment in the long-running series may not have made as big of a splash as some may have hoped, but Far Cry 6 still gave longtime fans much of the same open-world action that’s expected from the franchise.

In recent years, the open-world genre has exploded in popularity and scope. Far Cry 6‘s world is one of the most colorful in recent memory, as the tropical landscape, creative weapons, and offbeat characters give it an undeniable sense of personality. The island of Yara, like many of Ubisoft’s other open worlds, can take hours to fully comb through giving players more than enough content to hold them over. All good things must come to an end though, so for gamers that have concluded their adventures in Yara, there are a few other open-world titles that can keep the fun going.

Before Far Cry 6 brought players to a tropical locale full of tyrants and high explosives, Just Cause 4 did everything it could to be one of the most frenetic action games on the market. The Just Cause franchise has always been known for its bombastic destruction that mimics some of the biggest Hollywood blockbusters, but Just Cause 4 brought the property to new heights. The game’s open-world was filled with destructive weather effects and exciting new vehicles, and when combined with some signature Just Cause weapons, the game serves as an excellent follow-up to the destructive nature of Far Cry 6.

The modern Fallout games are widely regarded as some of the most finely crafted open-world games to come out of the video game industry, and Fallout 4 continues that tradition in a big way. Once held up as a sort of mythical game that would never see the light of day, Fallout 4‘s post-apocalyptic world is one of the most lived-in that Bethesda has produced. The signature Fallout charm is all there, and there’s plenty of nooks and crannies for players to spend hours searching through. Gunplay is also some of the tightest in a Fallout title, and the freedom allowed by weapon customization and settlement building creates hundreds of gameplay opportunities.

Compared to the bright action of Far Cry 6, the survival-horror nature of Dying Light can be a rather dramatic change in tone. The game’s open world, however, makes it one of the most unique first-person titles that players could get their hands on. Instead of relying on an extensive list of vehicles to traverse the world, Dying Light has players parkour through city streets and zipline over rooftops. All the while, there is a looming threat of the undead that combines with the game’s dynamic day-night cycle. For players that appreciate the attention to detail in Far Cry 6‘s open world, Dying Light has much of the same focus.

In keeping with the post-apocalyptic setting of many other open-world games, Mad Max allows players to fully explore the world of the iconic film series. From deep canyons to expansive deserts, driving through Mad Max can be an enriching experience for those that enjoy the feeling of travel. And for those that have finished Far Cry 6, Mad Max has a lot of similar game mechanics to the Ubisoft series. From taking down enemy bases and clearing out regions of the map, to creating a sense of resource scarcity that requires some creativity when taking down bad guys, exploring the wasteland can give players hours of content.

Few games have been so wildly successful as Grand Theft Auto 5 over the last ten years. While it already had the prestige of the franchise name behind it, few could have predicted how influential the open world of GTA 5 would be. San Andreas has become one of the most iconic locales in all of gaming history, and the intense action of the game makes it an excellent follow-up for those that have just finished Far Cry 6. From the city of Los Santos to the mountains of Mt. Chiliad, there’s a wide range of environments to explore and things to blow up.

Over the last decade, Ubisoft has specialized in creating massive open-world games that stretch the limits of video game exploration. Along with the Far Cry series, the Assassin’s Creed franchise is responsible for some of the biggest environments in modern gaming. Assassin’s Creed Odyssey has one of the most dynamic open worlds that gamers can find, stretching across ancient Greece and much of the Mediterranean Sea. It can easily take upwards of a hundred hours to even scratch the surface of what Odyssey has to offer, and for those that enjoy Ubisoft’s open-world formula, it’s one of the best games to go to after finishing the most recent Far Cry.

Far Cry 6 takes the franchise formula and puts a fancy coat of paint on it, and the expansive landscapes of Yara are one of the shining features of the whole game. Ubisoft has certainly figured out a formula of filling out open worlds with enough objectives and missions to take up a few dozen hours, but for those that aren’t satiated by Far Cry 6‘s explosive adventuring, there are more than enough games to fill that void. Luckily, 2022 looks like it will give gamers even more open-world games to dump hundreds of hours into.