One Afghan woman’s struggle to resettle in America, help her fellow refugees 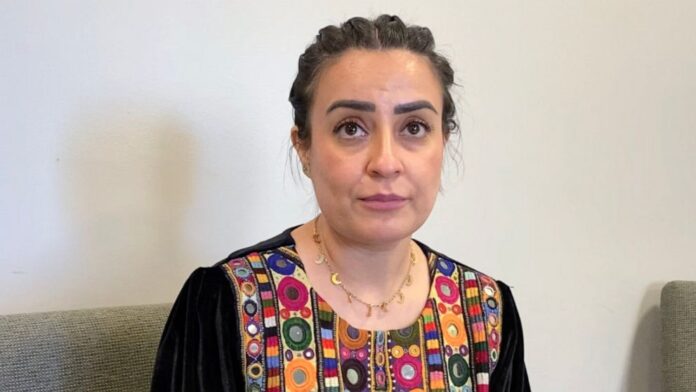 Muzhgan Azizy escaped Kabul just weeks before the swift Taliban takeover and chaotic U.S. evacuation, but adjusting to her new freedom in America has been difficult.

“The resettlement journey for me was not easy. Actually so many challenges. It was a struggle, for sure,” Azizy, 36, told ABC News. “From finding a proper spot to do my grocery shopping, to paying my bill in our apartments’ portal. It’s like the worst — only because the system in the U.S. is completely different from what I used to back home.”

Having worked for the U.S. State Department in Afghanistan for five years, she said she was extraordinarily grateful to obtain a Special Immigrant Visa (SIV) for her husband and 13-year-old son after waiting more than three years to get approved.

In July, Azizy and her immediate family went straight from Dulles International Airport in Virginia to an empty apartment she found online while still in Afghanistan, as Taliban fighters closed in on Kabul. “Luckily,” she said, the apartment was carpeted. They lived on that carpet for more than 25 days, she said, until she was able to get furniture and other household items.

The hardest part for Azizy is worrying about her elderly parents, who lived with her in Afghanistan and depend on her financially and emotionally. They weren’t able to come with her because under U.S. law, since she is married, they don’t qualify as “immediate family” under the SIV program.

“So that’s why I couldn’t bring them, but I left them all alone,” she said, trying to hold back tears. “And that’s very difficult for me, and they need my emotional support more than any other support because they are that age where they need their children around. I hope in the future I can find a way to bring them here safely, so that they can live with me here, and they also experience the safety, freedom and security.”

She tries to call them every day. Her father, she said, repeatedly tells her they are happy she’s not in Afghanistan to see how much the people are struggling under the Taliban regime.

“I want to say that we’ve left the whole nation behind,” she said. “People there, they suffer from hunger. They send their children [away] so that someone can feed them. The economy of the country is at its worst. So I really want the world to pay attention to them. They are people who have nothing to do with politics, and they suffer right now.”

Since the Taliban takeover in August, several countries halted aid to Afghanistan as they decide whether to recognize the Taliban government — even as the country nears economic collapse. Nearly 24 million people — more than half of all Afghans — are facing acute hunger, with nine million of them nearing famine, according to the United Nations.

It's impossible to overstate the gravity of humanitarian need in #Afghanistan. More than 24M people need lifesaving help. 160 organizations are delivering vital supplies for over 17M people.

Afghanistan is set to be the largest humanitarian operation in 2022. We need to ramp up. pic.twitter.com/Uyhuq4eJO0

In the U.S., Azizy said her family struggles to adjust to a new culture. Her husband worked as a civil engineer in Afghanistan but is now studying to become a site inspector since his education does not carry over, she said. Her 13-year-old son, enrolled in a public school in Virginia, has struggled with changing classrooms in high school, commonplace in America, but confusing to him, she recalled, since his school in Afghanistan had one room and one teacher.

“But I will say that I am grateful for all the challenges,” Azizy added. “When I first came into the United States like, the safety, the feeling of safety, security and freedom, hit us differently. So, I am grateful.”

Azizy’s outlook on life in the U.S. got better, she says, when she started working with Lutheran Immigration and Refugee Service (LIRS), the largest national faith-based nonprofit in the U.S. exclusively dedicated to serving immigrants and refugees.

She is now one of 12 Afghans working for LIRS full-time in a paid role from a new office space inside Lutheran Peace Church in Alexandria, Virginia. Azizy’s job as a senior program officer for Afghan placement and assistance is to ensure Afghan refugees resettling in Northern Virginia arrive safely at their final destination, have basic needs met and resources to start a new life.

Azizy praised the significance of having refugees from Afghanistan like herself employed in the office as they faces a “crisis” situation.

“I have a colleague that spent six days in Kabul Airport only to get into a plane. And when she tells me her story, it’s very sad. She says that, like, for six days she had a small bottle of water and she just kept drinking that little by little to stay alive,” Aziziy recalled. “I want to say that it’s not a normal refugee resettlement. It’s a crisis. So no matter how hard everyone works, there are still gaps.”

LIRS says its welcome centers are intended to fill gaps that other institutions can’t by offering mental health screenings, connections to health care providers, legal services, and referrals to community services such as food banks, faith communities and schools.

Zarmina Hamidi, who immigrated to the U.S. in 1988 after her family fled Afghanistan first for Pakistan due to the Soviet occupation in the 1980s, and works as a caseworker at LIRS, said it’s a “blessing” to have Afghans represented in the office, where hundreds of new refugees will soon arrive from U.S. military bases.

“I want to reiterate to them that this is temporary, that life will get better, that they’re in a nation where you can build your way up,” Hamidi told ABC News. “It’s a blessing for me to be offering that help, and I feel like they’re also blessed to have such resettlement agencies that have hired particularly Afghan nationals,” she said, “who speak their language, who are culturally aware, who can offer them that smooth transition.”

Hamidi says her own background as a double refugee, offers a helpful perspective for new refugees she meets, adding that when she started working she was happy but “surprised” to see that “every room I looked into – there were Afghans.”

Krish O’Mara Vignarajah – president and CEO of LIRS, who, as a young child, fled a civil war in Sri Lanka in 1980 with her family and came to the U.S. — said it was personally important to her to hire people who walked in the same steps as their clients.

“They literally are, in some ways, going through this experience,” she said of the refugee hires. “They may be a few months ahead of the clients that they’re serving – but they recently were our clients, and now they’re our staff.”

“The physical location is where we can bring them in,” Vignarajah told ABC News at the opening. “We can walk them through the paperwork. We can explain how to enroll in public school. You can have a doctor speak with them. We can create that personal human connection, so they don’t feel like they’re just lost in a system that’s been shuffling them from the Kabul airport to a lily pad to military bases.”

With clients and employees who share a common experience, LIRS offers a special necessity for new arrivals — human beings who understand.

With 30K Afghans on US bases, advocates prepare for resettlement ‘crisis’

With 30,000 Afghans still on U.S. military bases, LIRS expects to welcome 700 Afghans through the new welcome center in the upcoming year and another 1,200 Afghans to existing sites. While LIRS has already resettled nearly 1,400 Afghan refugees in Northern Virginia since the summer, O’Mara Vignarajah said approximately 7,000 Afghans have indicated that they want to resettle in Northern Virginia — where the Afghan community is strong.

The launch of new sites underscores the surge in demand for resettlement services, advocates told ABC News, and illustrates nationwide efforts to rebuild the U.S. refugee program after years of budget cuts under the Trump administration. As demand for their services grows, LIRS recently added 12 new sites to their network this year, making for settlement services in 51 sites in 21 states across the nation.

“We are aggressively rebuilding the refugee resettlement infrastructure that was decimated under the previous administration,” O’Mara Vignarajah said in remarks at last week’s opening. “Over those four years, more than 100 local resettlement offices were forced to close their doors or suspend services as a result of severe cuts in the refugee program. We at Lutheran Immigration Refugee Service were forced to shatter 17 of our sites.”

“But spurred by the arrival of our Afghan allies,” she added, “it is the dawn of a new era of welcome.”

LIRS expects to host a job fair in the Peace Lutheran Church space in the coming months for recent refugees and to lease a warehouse nearby to house donations, where refugees can “shop” for basic items like clothes, diapers, books and toys.

Susan Hilbert, 74, of Annandale, Virginia, who is part of a women’s circle at another church nearby, said her friend group decided to write a $250 check to LIRS and another $250 note to the Peace Lutheran Church because, she said, “We wanted to do something for Afghan refugees, and we were finding lots of big organizations, but we wanted to make a difference locally that we could see.” Hilbert brought with her pots and pans to donate to the welcome site.

O’Mara Vignarajah, while praising volunteers like Hilbert, acknowledged there’s only so much her organization can do — and called on the U.S. government to do more.

“While it’s worth celebrating 75,000 Afghans evacuated this summer, history won’t judge us solely on how many we led to safety but on how many we left behind,” O’Mara Vignarajah said, also calling for the Congress to create a pathway to citizenship for evacuees.

O’Mara Vignarajah lamented that the first question they hear from new refugees almost exclusively is: “‘How can I get my family back in Afghanistan out of harm’s way?'”

“It’s a constant source of sleepless nights for those we serve, knowing their loved ones face Taliban, retribution, economic collapse, and a harsh winter amid humanitarian catastrophe,” she said. “So let’s be clear, while the military evacuation is over, our mission to protect our allies is not.”

Azizy is also calling on the U.S. government to make the process easier for Afghans to bring over at-risk and vulnerable family members, like her parents. Until then, she says she’ll keep calling them each day, as she adjusts to her new life in the U.S. — and helps others adjust, too.

“I knocked on all the possible doors to have an easier way for my parents to bring them here,” she said. “But every time, there is something that looks like a big challenge for me.”