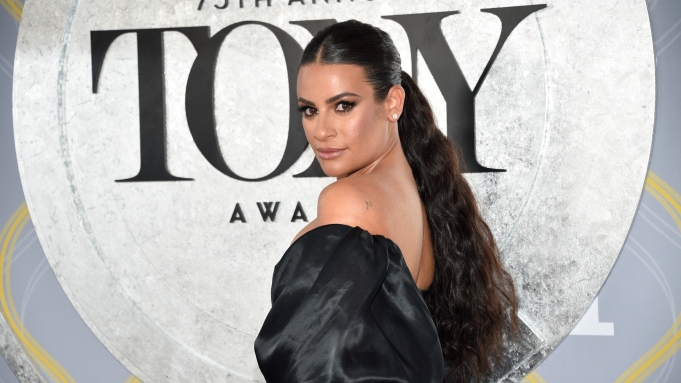 Feldstein on Sunday night announced she would be leaving the show on July 31, roughly two months before she was slated to depart the production. She attributed her early exit to a decision by the production “to take the show in a different direction.”

Michele, who was long-rumored to be taking over for Feldstein, will assume the role of Fanny Brice on Sept. 6. In the interim, the show’s understudy Julie Benko will perform the title role from Aug. 2 through Sept. 4 and every Thursday beginning on Sept. 8.

Jane Lynch, who plays Fanny’s mother Mrs. Brice, is also leaving the production earlier than expected and will be replaced by Tovah Feldshuh (“Yentl”) starting on Sept. 6.

Michele’s casting as the incandescent comic and chanteuse Fanny Brice is proof, to some, that manifestation is real. She has long (and loudly) expressed an interest to star in “Funny Girl” — a role that helped propel Barbra Streisand to stardom — and the musical even became a key plot point for her character on “Glee.”

The long-running TV series all but doubled as Michele’s public audition tape for Broadway; her character Rachel Berry sings nearly every song from “Funny Girl” — including “Don’t Rain on My Parade,” “My Man,” “I’m the Greatest Star” and “People” — during the show’s six seasons. After graduation, her character goes on to star in the Broadway revival of “Funny Girl.” So, Michele certainly has practice belting the show’s greatest hits.

In 2017, while appearing on “Watch What Happens Live With Andy Cohen,” she responded to a fan question about whether she’d ever appear in “Funny Girl” by saying “I really hope so.”

“We were thinking of doing it right after ‘Glee,’ but I did a lot of the songs from ‘Funny Girl’ on ‘Glee’ so it felt like a little soon,” she answered at the time. “But I feel really ready to do it now, so maybe we could do it soon.”

Some years later, and the timing is finally right.

“A dream come true is an understatement,” Michele wrote on Instagram after the news was announced. “I’m so incredibly honored to join this amazing cast and production and return to the stage playing Fanny Brice on Broadway. See you September 6th.”

The revival of “Funny Girl” opened on April 24 at Broadway’s August Wilson Theatre to lackluster reviews. After the Tonys, where the show was blanked, Feldstein initially said she’d be departing the role on Sept. 25. Lynch was also supposed to leave the show on that day, meaning she was never scheduled to overlap with her fellow “Glee” alum.

The casting does, however, reunite Michele with “Spring Awakening” director Michael Mayer, who produces and directs “Funny Girl.” Mayer won a Tony for directing the coming-of-age musical “Spring Awakening,” which opened on Broadway in 2006 and starred Michele, Jonathan Groff and John Gallagher Jr.

“Funny Girl” follows Brice on her improbable rise to fame and her stormy relationship with gambler Nicky Arnstein. The production first opened on Broadway in 1964, starring Streisand as Brice, and was nominated for eight Tonys, including best musical. The revival, which came six decades after the original, only scored one Tony nomination for Jared Grimes’ take on Eddie Ryan, a dancer that Brice meets doing vaudeville.

Ramin Karimloo, who plays Nicky Arnstein, and Grimes are expected to stick with the show during Michele’s run.