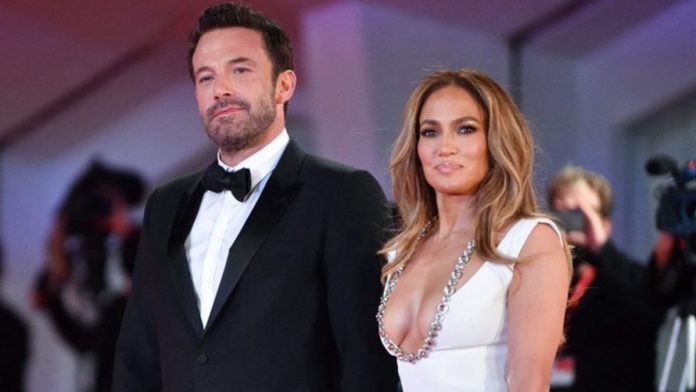 Months after revealing their engagement in April 2022, the couple obtained a marriage license in Clark County, Nevada, over the weekend, according to court records obtained by PEOPLE.

The duo then wed in a “small” ceremony, a source tells PEOPLE. “It was super, super small. They just wanted to be married so they got married,” an insider says.

Representatives for Lopez, 52, and Affleck, 49, have not commented.

The Marry Me singer/actress and the Argo actor/director rekindled their romance last year.

Lopez, in February 2022, opened up to PEOPLE about what makes their connection different now compared to 18 years ago, saying, “We’re older now, we’re smarter, we have more experience, we’re at different places in our lives, we have kids now, and we have to be very conscious of those things.”

“It’s a beautiful outcome that this has happened in this way at this time in our lives where we can really appreciate and celebrate each other and respect each other,” continued Lopez. “We always did, but we have even more of an appreciation because we know that life can take you in different directions.”

She added, “We have been in the game in the public eye long enough to know who we are as people and what really matters and what doesn’t matter. We have kids and we respect each other. … We really live our lives in a way we can be proud of and our kids can be proud of you. We’re just operating from a place of love and respect for everyone in our lives and that is very important to us. We know what the truth is [and] we hold it sacred.”

In her On the JLo newsletter in April, Lopez detailed how Affleck proposed to her — while she was in the bath.

“Did you ever imagine your biggest dream could come true?” she wrote at the time. “Saturday night while at my favorite place on earth (in the bubble bath), my beautiful love got on one knee and proposed. I was taken totally off guard and just looked in his eyes smiling and crying at the same time trying hard to get my head around the fact that after 20 years this was happening all over again, I was quite literally speechless and he said, ‘is that a yes?’ I said YES of course that’s a YES.”

“I was smiling so big and tears were coming down my face, feeling so incredibly happy and whole,” she added. “It was nothing fancy at all, but it was the most romantic thing I could’ve ever imagined…just a quiet Saturday night at home, two people promising to always be there for each other.”

The star — who also referenced her green diamond engagement ring, saying, “green has always been my lucky color and now, for sure, it always will be” — concluded, “Two very lucky people. Who got a second chance at true love.”

Lopez and Affleck previously began dating in July 2002 and got engaged that November before postponing their September 2003 wedding just days before the date. They ultimately called off their engagement in January 2004.

Affleck told WSJ. Magazine in December about feeling “lucky” to have been given second chances, both in his work and personal life.

“I’ve had second chances in my career. I’ve had second chances as a human being. Life is difficult, and we are always failing and hopefully learning from those failures,” he said. “The one thing you really need to avail yourself of the opportunities provided from that growth is the second chance. I’ve definitely tried to take advantage of that. I haven’t always been successful, but in cases in which I have, they’ve turned out to be the defining aspects of my life.”

E-Librarys is an initiative launched to help the unknown authors become prominent through enabling them to publish their articles, poems, journals, stories, novelettes, blogs, and any related script with our website. We help authors reach the world with a tap of the finger with our website.
Contact us: info@e-librarys.com
<div class="td_block_wrap td_block_7 tdi_218 td-pb-border-top td_block_