How to Let a Metaverse Die 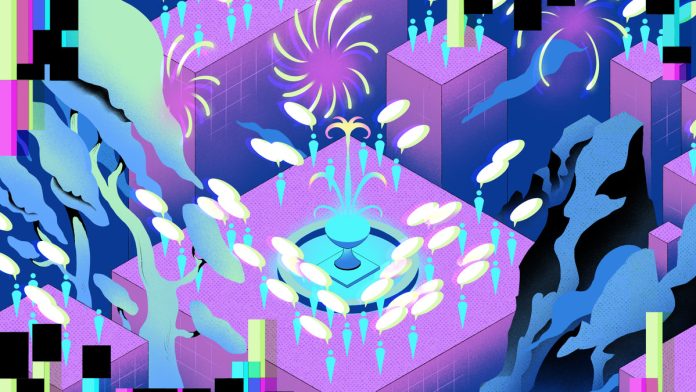 Annalise Baker is a 17-year-old MMO player running WarCore on her Windows XP clunker of a computer. It’s an hour before dinner — and an hour before the MMO goes offline for good. She’s reached her level cap, shown off her prized crimson-alligatorskin-brogues, and now spends her final hour on a bench in the virtual world, voice chatting Marissa, a friend she met in-game, unsure of how to discuss their feelings for each other, or if Baker should share the fan art of them she created.

“I always kind of assumed we’d have more time you know?” Marissa says. Time ticks by. The end is nigh, and though she’s just a high schooler, she’s learning how to accept the exodus from a virtual world and how to live with those emotions.

WarCore isn’t an actual game, not in the real world at least. Baker is the protagonist of Marissa is Now Idle, an angsty virtual novel by developer Niandra! about the end to a gaming world. Marissa was one entry to the Dying MMO Jam, a game jam of single-player video games that take place during the final few hours of a fictional MMO.

MMOs are still considered the first examples of a metaverse. Players go on quests, combat, and loot, but a lot of the gaming experience is about social interaction and community. A metaverse is any social virtual space, whether it has a combat engine like a more traditional MMO, augmented/virtual reality components like VRChat to help people mingle and bond together, or different pick-and-choose components from play to shopping to socialization, like Roblox does.

Despite their vast membership, the livelihood of these worlds can be precarious. Over the years, numerous virtual social spaces have been taken offline. There’s even a genre of YouTube videos dedicated to the last moments of an MMO, usually involving a crowd of fantastical avatars dancing with and waving to each other one more time. Just think of the collapse of Club Penguin, Matrix Online, and Planetside 1. “After a quarter of a century of humans being online, witnessing some kind of digital extinction or ruin is just a universal experience,” Salem Hughes, the Dying MMO Jam host, tells Polygon.

At the same time, corporations are funneling millions of dollars into developing their own metaverses. These social virtual spaces are centered around less-fun concepts like property ownership, crypto DJ sets, and office meetings with Mark Zuckerberg. But what will it look like when these spaces are shuttered? The death of old virtual spaces gives us a way of thinking about these future metaverses, at a time when we can still affect their strange life cycle.

A metaverse being killed is different from a single-player game becoming unsupported, or failing to receive updates. In the latter’s case, you can still boot up your copy and play at home. When the plug is pulled on a virtual world, the very ground your character walks on becomes untraversable. The community spaces you used are upended, the names of your friends are purged — if you didn’t get their contact information before the shutdown, or have never seen them outside the metaverse, good luck finding them now. Your level, gear, and customization is cleared. Any user generated content is destroyed, alongside the thousands of hours you put into building homes or castles. This typically includes any money you invested into the game, whether microtransaction or larger payments, like land contracts to build on.

I say killed because virtual spaces are being damaged by the same forces ruining real-life social worlds and natural spaces: the need to turn a profit.

“The whole conversation about virtual worlds ending is driven by corporate profit,” said Dr. Tom Boellstorff, a metaverse researcher and anthropology professor at the University of California, Irvine. “The thing about calling them ‘disappearing’ and ‘dying’ is it removes the agent. These virtual worlds don’t die, they’re killed or removed.” He points to virtual worlds that are 20, 25 years old and still chugging along because they’re able to thread the needle of profit. LambdaMOO, for example, is a text-only virtual world released in 1990 and still active, while 1997’s Ultima Online got a hotfix update earlier this month. The end isn’t always inevitable. “To me, it’s not about a human need to migrate,” Dr. Boellstorff said. “It’s about a corporate need to make money.”

In the Dying MMO Jam, developers expressed their anger at corporate meddling through games where pixelated market traders complain they’re being evicted, or players at the last minute question what the higher-ups were thinking. Most of the jam entries, like Niandra!’s Marissa is Now Idle, Ellis Dex’s please tell me you love me, and What is Luna’s Winds of Kenobachia Online, focus on low-poly graphics, saying what you mean while you can, and the widening loneliness of the end times. “Wandering around the low-poly world of Dossip.net and watching inhabitants chat evokes a strong sense of nostalgia for games I played as a kid, that no longer exist,” Niandra! said

Why focus on the end, if it is so sad? Several game jam designers mentioned how this defined end can give users a chance to reflect on what parts of these worlds’ design didn’t work. MMOs can be especially centered on constant engagement by way of events, bonuses, and grinds, which can be alienating to many players. Winds of Kenobachia Online addresses this idea of what “extremely online” spaces can do to a person, and how to let it go. It suggested that designers could build social spaces that fight against the need for constant engagement — even if that means the MMO is killed sooner.

Many developers at the Dying MMO Jam try to be death-positive with their approach to these virtual spaces. But it’s hard to do so when the existence of such spaces are threatened or actively killed by the interests of larger corporations. And fans face an uphill battle when trying to bring these worlds back to life. Games scholar Evan Conaway told Polygon that although World of Warcraft Classic is a shining example of fan efforts to bring back old MMOs, most large server emulation projects experience a chilling effect from legal threats or lack of developer buy-in and access to the source code.

It’s early to say how future iterations of the metaverse might fit into this. Building a virtual village home or decorating an island takes work. Grinding to level 40 takes dedication. Wouldn’t you be more willing to build a community in a game if you knew servers would be open for a defined period of time? A land trust stewardship, in which a fund is set aside for consistent, long-term management of a site, is one way for this to become a reality. A guaranteed minimum metaverse lifespan would be especially helpful for worlds helmed by corporations that frequently cycle through products and strategies, like Google Glass becoming defunct, or Facebook’s pivot to video.

However, if metaverse developers work towards interoperability technology, it could mean each individual shut-down has less of a world-destroying impact. “We live in a world where there is almost no interoperability between virtual worlds,” Dr. Boellstorff told Polygon. That means players have an incredibly limited ability to port avatars, locations, communities, and items across virtual worlds like Animal Crossing into Fortnite. In the past, a metaverse shuttering meant finding a new home — as in the case of the “diaspora” of Uru players who migrated to other virtual worlds after the end of theirs. The interconnected metaverse might make it easier for communities to migrate from one to another, carrying their names, connections, and worlds on their backs.

But this also comes with its own data security ramifications. You could be giving corporations another point of data to track and surveil across worlds. (And you’d have fewer fun character creation segments, too.) “A lot of people don’t want to have the same identity when they go kill dragons or do some Star Trek thing,” Dr. Boellstorff said.

If you want to hold onto some of what you’ve built in a metaverse after it’s disconnected, Dr. Boellstorff recommends a community space hosted on some third-party, like Discord, to stay connected to your friends. The virtual world may no longer exist, but the relationships you built there can live on. There are more hardcore options, like the server blades Blizzard auctioned off for whoever wanted a physical souvenir of their virtual world. Although now unable to store information, each was marked with the realm it helped run, allowing users to point to an IRL item and say “Here’s where we met, in that Darkspear church.” The clearest constant are the memories we have.

Saying goodbye, is after all, part of the human experience. You’ve probably done it online, more times than you’d think — like if you have a Webkinz inactive for more than a year, maybe in five years to your work avatar.

“Humanity is always adapting, inventing, moving forwards; I don’t think anything that promises to stay can really fulfill that. And that’s okay!” Ellis Dex told Polygon. “So setting a game in a dying MMO was healing for me — a bittersweet goodbye to my childhood online, and an acknowledgement that people and humanity change, which I want to celebrate and mourn at the same time.”