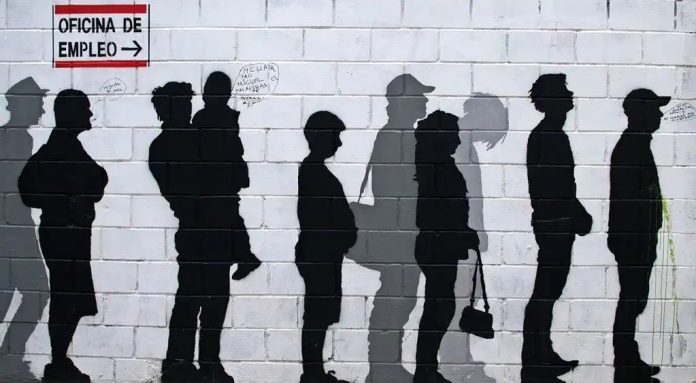 The Jobcentre can be an ugly place. Steven Bradbury follows up his experience of trying to get on the dole in austerity Britain with the second instalment of ‘Dole Life’. Read Part One here

Week three – the fun week. A different adviser (again) and this one was a disaster before I even got there. Due to my careless ignorance, I missed the appointment. My adviser didn’t take this lightly and from what I could see, may have actually taken it personally. I don’t think we would have got along even if I did make the original appointment. She was brisk but clumsy – a combination that doesn’t float too well for most. Saying that though, she had the delightful habit of patronising me with statements like ‘it’s hard to get used to’ whilst smiling and shaking like one of those psychotic hyenas from The Lion King. We conversed about why I missed the appointment and every now and then she’d cut me off in a Paxman-esque way like she was holding me accountable for something serious. It was condescending and unnecessary. Righteousness and anger fuelled the fiery tone in her voice. Her little stabs were grating on me; it was like a contest to see who would crack first. Her way of talking to me was similar to that of being prodded up close with a wooden stick by some socially rejected zoo keeper who gets their kicks from bullying small animals.

I wasn’t sure when I got paid and it would have been a hell of a lot easier to have just looked this up myself, rather than trying to be moderately civilised (lazy) and simply asking her when the pennies roll in. She tried to work it out like it was a long math question. I guess it’s my fault as I should have emphasised the word “when”, but our brief history together indicated that she was doing this simply to waste my time at the sound of her own nagging voice. After a couple of minutes of this circulating itself, I Paxo-cut her myself and asked: ‘So it’s fortnightly?’ ‘Yes’. Done. I was out, and two days later I got a letter that tells me I have now been sanctioned from payment for a month.

Where I went wrong with her, I can only guess. I honestly thought we were getting along. She was crafty with her tactics – at least, that’s one way to look at it. She even wrote out in front of me what I agreed I had said. Rookie mistake. I didn’t even think to lie at that point; I just wanted to get out. Regret and anger forced its way into the front of my mind and so I picked up the phone to protest against this rotten situation. Whoever answered the phone was somebody I had never spoke to and so I asked them about disputing this sanctioning. She was quick with a reply; firm and fair. I didn’t have much grounding. I shot myself in the foot and now I was angry that they let me pull the trigger. I asked her if compassion is ever put to use at the Jobcentre but she just carried on with the facts. Everything about this was just another lesson learnt: you get sloppy and assure false confidence, you’re going to stand in shit. If you don’t step in it, then I couldn’t really think of anything worse than not learning where you’ve cocked up. In a spree of adrenaline I ordered myself and went on a C.V spree. The blurry vision of seeing a job being on the horizon began to disappear by mid-afternoon. I racked my brain for anyway to get off this wretched thing, determined not to have to speak to another adviser again. Of course, it didn’t take long until I realised that there was a chance to get an old job back; summer was coming and bars will be looking for staff. I went down to speak to the manager, handed in my C.V just for safe measures and a week later I had a job.

I got lucky (so to speak). Unemployment is statistically falling and of course David Cameron has to mention something boring and typical: ‘More jobs means more financial security for people.’ Okay, unemployment is falling but what about wages? Apparently, they are falling too. Wonderful. And as Labour’s shadow work and pensions secretary Rachel Reeves pointed out: ‘…today’s figures show that young people and the long-term unemployed are being left behind.’ So yes, as usual, things aren’t smooth and clear but the most important factor that anybody can get a grasp of is the social factors. Tom Clark highlights these problems in his new book Hard Times, which was quoted by controversial news source Press TV:

‘Clark contends that “long-term unemployment is another blight which hammers some communities more than others. It seems plausible that societies which neglected so many of their citizens during the good times might be particularly prone to throwing them to the dogs in hard times”. Working life, he argues, especially at the bottom end of the workforce, has become “laced with worry”.’

In the end, it comes down to anxiety and fear. Not being able to provide is a sickening reality for some and the further you go down the food chain, the closer you get to it. Which leads back to the point on wages slipping. What needs to be rising is the quality of living for the people that have to get volunteer jobs at Poundland because they’ve been on job seekers allowance for too long, not how many people we can fit into these crap paid jobs.

The Jobcentre is an ugly place. They have it that way to try and make you run screaming into the hands of an employer and tell the rest of the employees what a terrifying experience you had with those heartless, insentient beings they call advisers. Those advisers are doing their patriotic duty to give Cameron content for his tweets and at the end of the day just doing the same thing you’re doing, which is looking for a way to provide for yourself or whoever else you’re shacked up with. It’s true that people scrounge off the system but the point of the matter is that bottom of the line jobs need to start looking more appealing than the dole, not the other way round.