Afghan Women on the Road to Making History! 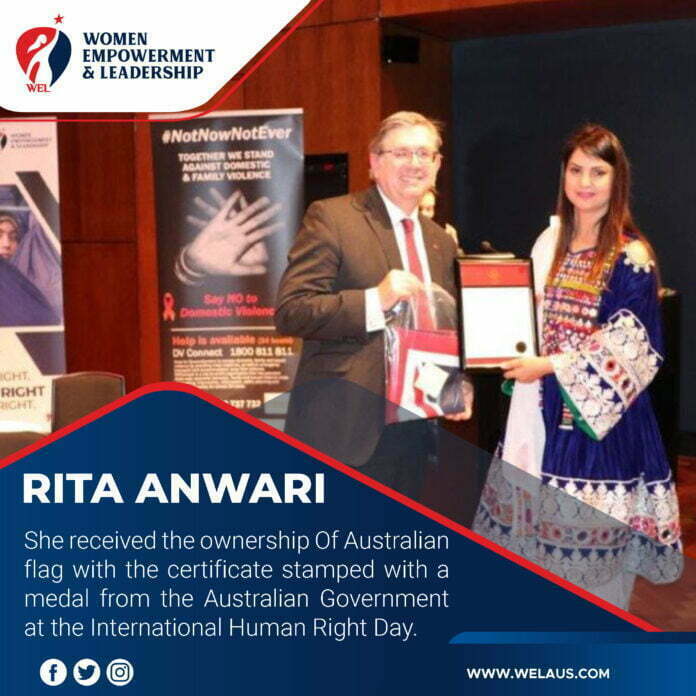 Australia, Women Empowerment and Leadership (WEL) association had the pleasure of successfully convening the “Women Rights are Human Rights: Raising the Voices of Women and Girls from Afghanistan” event on December 14, 2021. In this event, the efforts of Afghan girls and women were acknowledged, and their voices were raised.

MC by a very talented and kind heart  Leila Loei – Ms Australia World Ambassador to speak up on behalf of Afghan Women.

The host, guest speakers, and participants reiterated that women’s rights are human rights during the event. This fact will necessitate ensuring that the voice of women is heard and attended to attain human rights for all.

While welcoming the Afghan Women who recently arrived in Australia, Dr. Rita Anwari Sultani, founder and president of the WEL, highlighted the challenges these women faced in Afghanistan, particularly their rights as women and their values as human beings. Dr. Anwari also pointed out the opportunities awaiting them while being in Australia. She assured the women left in Afghanistan that they are not alone.

People are working on their behalf to ensure their rights are preserved.

Mr. Scott McDougal, Commissioner of Queensland Human Rights Commission, conveyed his message of welcome to the newly arrived Afghan women and children in Australia. He also focused on the measures to protect the newly arrived Afghans from violation of human rights, discrimination, domestic violence, and social disrespect. It is vital for the Afghan women and families who arrived in Australia to understand their rights and respect others’ rights.

Shannon Fentiman MP for Waterford Attorney General and Minister for Justice, Women Rights and Prevention of Domestic and Family Violence, who attended the event online, acknowledged the organizers of the event and the guest speakers. She reminded the audience about acknowledging fundamental rights that all human beings have. She pointed out the proportion impact of COVID19 on women, putting them at risk of experiencing domestic violence – a shadow pandemic for women. She emphasized that it is crucial to raise awareness and start a conversation on how to play the role of improving women’s rights. She admired the role WEL has played in enhancing these roles in Australia.

Ms. Christine Castley, Chief Executive Officer at Multicultural Australia, conveyed her message of improving women’s rights as human rights by putting “Make Equality as your Priority.” She concluded by focusing on women’s access to education, right to vote, equal wage, housing and health services, and access to a life free from violence and discrimination.

Senator Paul Scarr, Liberal National Senator for Queensland, expressed his warm gratitude for the organizers and participants of the event. He acknowledged the members of the Afghan Community in Queensland for their efforts in making a safe and successful community in Australia. He briefly highlighted the difficulties in securing safety for the Afghan people who were at risk during the collapse of Afghanistan and the challenges they faced on their way while coming to Australia. He reminded the participants of the tireless efforts Dr. Rita Anwari has put in helping him get the applications forward, secure visas, and ensure the vulnerable Afghans are successfully evacuated to Australia.

He reiterated the values Australia respects in protecting vulnerable human beings. He highlighted that it is not only the people who found refuge in Australia. Australia also found you as people who can potentially contribute to building a decent society while being here.

He recognized Dr. Rita Anwari’s efforts in building a prosperous society in Australia in the past years. He recalled when he first met Dr. Anwari while establishing the Australian Afghan Chamber of Commerce, working hard to create a bond between Australia and Afghanistan. He briefly explained the journey Dr. Anwari has taken in building her reputation over the past few years. Precisely in the past few months for securing safety for the vulnerable Afghan groups who suffered losses and threats while being in Afghanistan.

He thanked Dr Anwari on behalf of the Australian government and the Afghan people who recently arrived in Australia due to her efforts.

Following the keynotes provided by the guest speakers, the WEL association presented the Bravery Award to Ms.Roya Dadras, Spokesperson of Afghanistan’s Ministry of Women Affairs, for her efforts to enhance the rights of Afghan Women in her previous role in Afghanistan. During her five years, Ms. Dadras has contributed tirelessly to modernize women’s rights according to Islamic Law, ensuring women and children rights and psychology culture, developing plans and policies for the Ministry of Women Affairs, and defending women’s rights in different platforms.

Ms. Dadras expressed her gratitude to the government of Australia, Parliament of Australia, Women Empowerment and Leadership Association, Griffith University, and Multicultural Australia for enhancing women’s rights as the rights of humans. Ms. Dadras represented the Afghan women who contributed to the development of their country besides their male counterparts during two decades, but who saw their country collapse in a few months, and all their sacrifices were wasted. She recalled her vision for making Afghanistan as successful for the Afghan women to have all the opportunities in Australia. Still, at the end of the day, that vision was not achieved because of the collapse of Afghanistan. She called upon the international community to hear the needs of the women in Afghanistan, the challenges they face, and ensure safety for them, as their support is needed more than ever.

At the end of the event, Certificates of Appreciation were distributed to all the team members in WEL and Senator Paul Scarr’s office to recognize their tireless efforts for securing visas and evacuation of vulnerable Afghan groups for the past few months.