A Look Back at 2020’s PlayStation Showcase 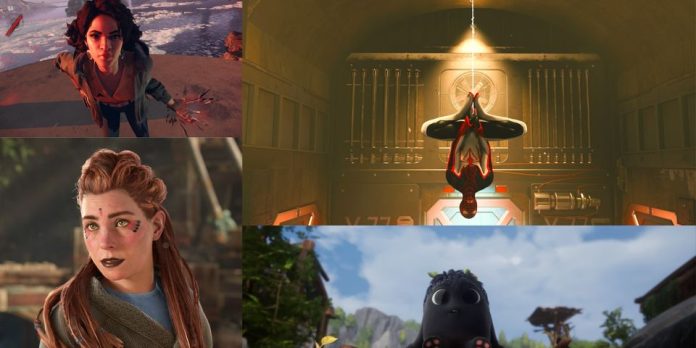 Since 2020’s PlayStation showcase, games like Horizon Forbidden West have launched successfully while games like Pragmata have yet to be released.

Before the release of the PlayStation 5, Sony held a showcase titled “Future of Gaming”, whetting the appetites of gamers by giving them a taste of what they could expect from the incoming gaming generation. There were several games from Sony’s first-party studios shown, including Insomniac and Guerrilla Games. However, Sony also gave plenty of time for third-party studios to show off what they had planned for the PS5. As far as gaming events go, the June 2020 PlayStation showcase was successful in making the PS5 appear as though it would serve up incredible gaming experiences.

Roughly two years later, enough time has passed for gamers to get comfortable with the PS5. It is useful to look back at the pivotal showcase to see how much of it has been realized, how much is still in development, and how much has disappeared off the face of the Earth. Though some projects are still in limbo, most have been released, and gamers have had the chance to judge them.

The First-Party Games That Lived Up to the Hype

Quite a few first-party games were shown, and almost all of them have lived up to the high expectations that surrounded them. Insomniac stood out by showing two games, namely, Ratchet & Clank: Rift Apart and Spider-Man Miles Morales, and since their release, both games have been well received. Spider-Man: Miles Morales served as the perfect cross-gen bridge to keep Spider-Man fans occupied until the sequel, while Ratchet & Clank and its warping illustrated the potential of the PS5 with its SSD.

Guerrilla Games also made an appearance with Horizon Forbidden West. Players got to experience the beautiful environments displayed in the announcement trailer, and Aloy’s new story was bigger and better than what came before. Horizon Forbidden West was also filled with plenty of new features including the ability to glide and mount flying machines. Bluepoint Games was also there, sticking to its specialty by revealing its Demon’s Souls remake. The game managed to stay faithful to the original while bringing it to a new generation of gaming, pleasing critics and long-time Soulsborne fans. Additional first-party games presented that were celebrated upon release include Sackboy: A Big Adventure, Returnal, and Astro’s Playroom.

Although plenty of the games presented lived up to the hype, there were also a few that disappointed a couple of gamers. This includes Polyphony Digital’s Gran Turismo 7. Not many deny that it is an impressive game that is deeply embedded in its love for car culture, but there were several complaints regarding its implementation of microtransactions and the focus on grinding. Destruction AllStars by Lucid Games failed to receive much support at launch, and it never found the popularity required to keep its multiplayer mode lively.

The State of Third-Party Games

Alongside Sony’s first-party games, there were plenty of projects from third-party studios on display as well. From Arkane Studios, players saw Deathloop, and from the trailer, it was difficult to understand what the game was about, though it sported a cool aesthetic. Since launch, gamers have gotten a better grip of its time-twisting ways, and the game proves that the studio has a future after Dishonored. Resident Evil Village, which also showed up at the event, has been well-received since its launch. Capcom has continued supporting the game, and the Shadows of Rose DLC will be launching soon.

Rockstar’s Grand Theft Auto 5 made an appearance, confirming that the game would be stretching its lifespan across three gaming generations. At the time, the trailer was not too well-received. However, when the remastered game launched, critics did praise it, and gamers were glad to experience Los Santos again. Other third-party games with successful launches include NBA 2K21 and Hitman 3.

Not all games have managed to be headliners, however. Ghostwire: Tokyo appeared to be an interesting game set in a supernatural version of Tokyo. However, upon release, critics complained that the combat was repetitive and that the open world was bland. Similarly, Godfall also showed potential as a game capable of bringing heavy combat, but upon launch, there were complaints that the game required far too much grinding.

The Indie Games That Nailed Their Landing

Sony also gave some time for smaller indie studios to show gamers what they are cooking. While they may not be developing AAA games, they have been able to satisfy gamers with unique and innovative experiences. This includes what was perhaps the darling of the entire show, Bugsnax, which managed to stay in the minds of gamers thanks to its catchy soundtrack sung by Kero Kero Bonito. The strange adventure from Young Horses landed well with gamers, painting a good future for the studio.

Another standout from the showcase that has lived up to its hype is Ember Lab’s Kena: Bridge of Spirits which takes gamers on a whimsical journey to help troubled souls find peace. Gamers were amazed by the game’s cinematic visuals and surprising difficulty combat, and Kena has gamers ready to see what Ember Lab will come up with next. Other indie titles that launched successfully include Jett: The Far Shore, Oddworld: Soulstorm, The Pathless, and Solar Ash.

The Games That Have Yet to be Seen

There were a few tantalizing games shown that gamers have yet to enjoy. KO_OP’s Goodbye Volcano High appears to be a cute choice-based game featuring dinosaurs facing the anxiety that comes with the end of high school, but it has had an extended development period, and though it is slated for a 2022 release, gamers have not seen much of it. It would not be surprising to see the game pushed into 2023. Another cute game that has yet to be released is Little Devil Inside, which features explorers searching for monsters. Fortunately, Neostream Interactive has frequently updated gamers on the title, and they can expect it in the fourth quarter of 2022. A cute cat also invaded the showcase through BlueTwelve Studio’s Stray, which launches this month. Thanks to its unique premise, the game has managed to maintain interest in it for years.

A Square Enix game called Project Athia was also shown. It has since been renamed Forspoken, and it has faced several delays, the most recent one pushing it to 2023. From Capcom, gamers got a glimpse of Pragmata, and though not many details were revealed about it, it is evident it leans heavily into the sci-fi genre. Like Forspoken, Pragmata is slated for a 2023 release date.

Overall, most of what was shown in the 2020 PS5 showcase has been delivered, and gamers have been happy with what they have received. Furthermore, those games that have yet to release appear to be still on track to launch sometime in 2023. Although a few duds did appear, the showcase, for the most part, gave a good view of the current gaming generation’s landscape.