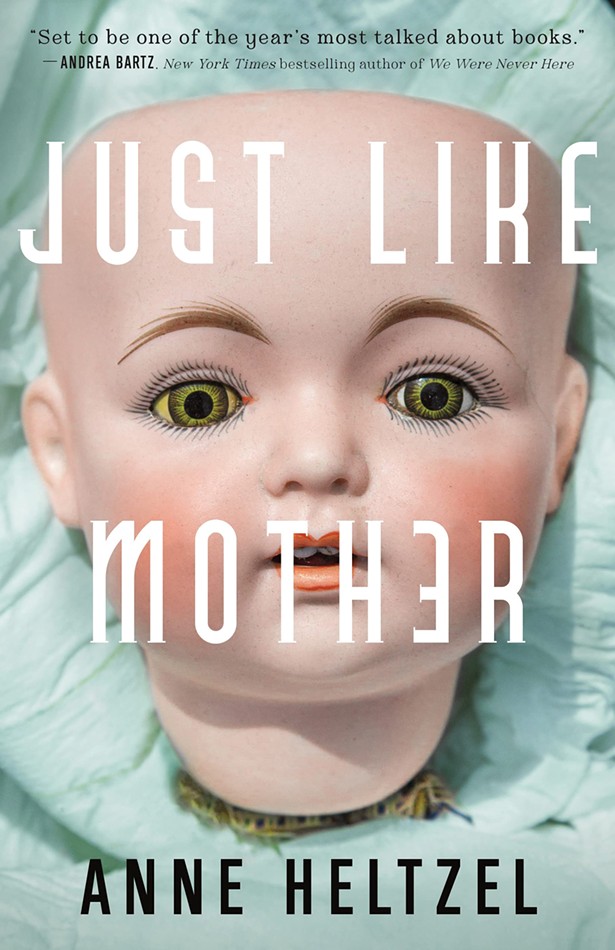 Anne Heltzel’s adult, modern gothic horror debut (after YA novel Charlie, Presumed Dead), is a captivating and timely story that showcases the dangers of conflating womanhood and motherhood. In the wake of recent Supreme Court events, the backdrop of this book, with its focus on the autonomy of women’s bodies, makes it an especially timely and thought-provoking read. While one might find its atmospheric themes to be reminiscent of other classic reproductive-themed thrillers such as Rosemary’s Baby, The Handmaid’s Tale, and even The Stepford Wives, Heltzel’s visceral and vibrant imagery and dialogue, coupled with a page-turning plot and feminist undertones, make her a fresh and exciting voice in this genre.

Maeve, the main protagonist of the story, and her older cousin Andrea (tightly bonded, they have made a pact never to be apart from each other), are born into a radical feminist cult called “The Mother Collective,” a Vermont-based commune that has a fanatical and rigid perspective on both motherhood and the role men play in women’s lives.

The book begins with a glimpse into the strange and mysterious childhood of the cousins when, one day while lunch is being served by “Mother with the lazy eye,” they hear a relentless “thud, thud, thud from the room next door and wild grunts like pigs at a trough.” When “Mother with the red hair” emerges from the locked room flushed faced and smelling of musk, the girls request to “go and weed the garden.” This is something they do to appease Mother’s “no idle hands” rule and to talk about and speculate on the source of the disturbing noises they heard. What could it be? “A New Baby?” “A New Puppy?” When Andrea shares that she knows where the Mothers keep the key, Maeve reminds her, “We never disobey” but when “I think of the puppy. Alone in the room. Scared. Making those noises.”

The harrowing events that transpire from this point lead to Maeve bravely escaping the cult, at the age of 8.  She is adopted by Patty and Tom; good people who refuse to allow her to dwell in the past. Andrea was not so lucky. They are lost to each other until a DNA test reunites them 25 years later in New York. Maeve works as a struggling book editor and Andrea, a wealthy entrepreneur, has just moved from the West Coast. Both have been searching for each other forever; plagued constantly by wondering what each other had become. “It drove me mad, not knowing,” Maeve says. “More so than not having her in my life, maybe. It was the lack of connection to who she was, the absence of noise where I’d once been able to read her thoughts as easily as my own.”

Andrea’s reappearance in her life bolsters Maeve’s tenuous grasp of her own personal identity as Andrea is the connection she longs for and needs to help her move forward from her traumatic past. Andrea is the CEO of a NewLife, a company that supplies hyper-realistic baby dolls to women to either assist them in preparing for motherhood or help them grieve a lost child. Andrea has personal experience with grief as she lost her three-month-old daughter, Olivia. The prototype of the doll now bears her name.

When Andrea invites Maeve to spend her birthday weekend at the mansion she and her husband, Rob, have purchased in the Catskills, she agrees without hesitation. She wants to spend time with her cousin and repair the bond that was broken when the cult was broken up. However, Maeve’s marital status and her decision not to have children are perplexing and problematic for both Andrea and everyone associated with NewLife and provide the author an opportunity to convey several different perspectives on motherhood as well as society’s expectations around the experience. Filled with frightening, unexpected scenarios and vivid descriptions, this chilling look at modern motherhood through the lens of true horror will linger with you long after reading the last page.

2. Please Wait to Be Tasted

The first cookbook from the James Beard-nominated team at Lil’ Deb’s Oasis is a rollicking portal to the beloved Hudson eatery’s technicolor LGBTQ+ oasis. Equal parts fun, accessible, and mouthwateringly sensual, the cookbook imparts the restaurant’s tips and tricks for recreating the playful community-driven spirit of Lil’ Deb’s right in your own kitchen. Nearly 70 recipes for Perez-Gallardo and Black’s acclaimed (and fancifully named) tropical comfort food classics like charred octopus in the ink of its cousin, ceviche mixto with popcorn, sweet plantains with green cream, and abuela’s flan are punctuated by advice on everything from love to lobster parties, and how to dream up a killer wine poem. Reading through these pages alone is enough to lift your spirits and entice you to hunt down a bunch of plantains.

Four thousand pounds of uncut cocaine drop onto Central Park from the summer sky, suffocating hundreds of people. This weather anomaly is the work of the most powerful drug lord on the planet, Joaquin Alboroto. Danny Corcoran, a former NYPD captain grieving over the death of his wife, is on the case. Backed by the funding of anonymous billionaires, Corcoran and his team chase Alboroto down. A gritty adventure with gunfights and car chases follows as Woodstock resident Karp uses the same skills he put to work when cowriting with James Patterson.

4. And You May Find Yourself…Confessions of a Late-Blooming Gen X Weirdo

In this series of essays, Kingston writer Botton covers the process of finding herself later in life. Botton has always felt like an outsider, from not enjoying pop music in grade school to not understanding office politics in adulthood. Yet instead of embracing those differences, Botton realizes in her adulthood that she has been pretending to be someone else in order to keep authority figures happy for most of her life. She turns to writing to make sense of herself, connecting the weird kid she used to be with the woman attempting to live her truth in the present day.

In their second anthology, the members of the Hudson Valley Women’s Writing Group offer their perspectives on topics like memory, nature, and COVID-19. In one story, to pass the time teachers make a game out of picturing speakers at a dull superintendent’s meeting naked. A narrator in a poem pictures herself as a refrigerator and God as a hungry teenage boy looking for a snack. All the guns in the world suddenly jam, and only shoot for women. The poetry and prose range from funny to melancholic, reminiscing on the past, musing on the present, and speculating about the future.

Cowritten by Woodstocker Beaujour, Nöthin’ But a Good Time serves as an encyclopedia of `80s rock. The narrative begins in the `70s and spans until the `80s rock revival today, as well as the rise of grunge in the `90s. Opening with a seven-page cast of characters, each chapter consists of bits of interviews with bands, managers, costumers, and roadies. Stories include the time Ozzy Osbourne snorted some ants after losing a pushup contest with Nikki Sixx. Besides these wild moments, the book doesn’t shy away from the ugly side, including the sexism prevalent in the music business.